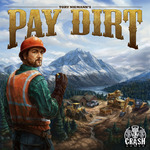 There are also themes that become special because of the angle the game takes and Pay Dirt is one such game. Not only is it about gold digging in modern-day Alaska, but the game seems to take a different approach to it, namely that of reality shows such as Gold Rush. While theme in and of itself isn’t necessarily a selling point for me, it does help a game stand out, even more if it is well incorporated in the game. Does Pay Dirt strike it rich? Let’s find out.
Pay Dirt (Crash Games) by Tory Niemann is a game about prospecting gold in Alaska. In the game, 2 to 4 players are competing to find as many gold nuggets as possible by purchasing plots of land that hold an unknown quantity of nuggets, equipment that is used to dig out those nuggets and hire staff to help run the whole operation more smoothly. Be warned! At the end of each round, the players will face some hardship which not only make their lives more difficult, but also bring down the temperature, bringing them closer to the end of the game.

The game has two main mechanic, that of bidding on claims, equipment and personal; and worker placement to operate the machinery and go to town to sell nuggets or purchase some more equipment. It plays well with 3 or 4 players (haven’t tried with 2) and lasts about 45 minutes to 1 hour.

Please note that the copy of the game I have is a print-and-play version which I’ve assembled myself and is not the final version. I can’t really speak to the quality of the components, but I can say that the art is nice and clean.

The rulebook isn’t final (at least I hope it isn’t), with some of it a little unclear and missing examples. Since it is not final, it is simply a text file and contains no illustrations. Hopefully with the print-and-play out in the wild, they will get questions which will help make the rulebook clearer and more complete. 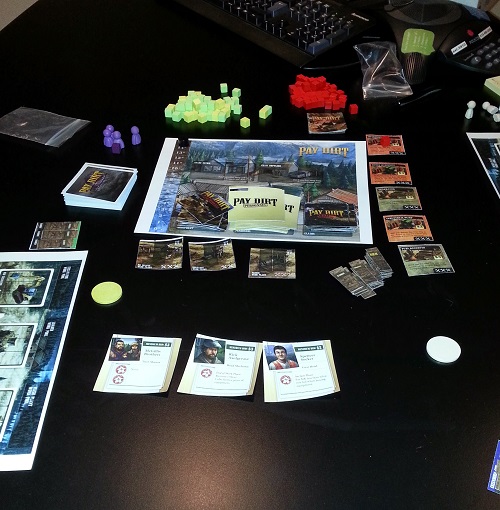 Pay Dirt – playing at work with my pnp

Setting up the game is pretty straightforward: give each player $9, a player board, a Greenhorn Claim tile and a set of 10 workers. The players will only have 5 of their workers at first, with the other 5 being set aside for the moment (they will enter play when the players purchase Personnel tiles). Place the main board in the middle of the table, place the Temperature token on 15 Celsius and shuffle all the tiles. Each player now takes 3 Barren Pay Dirt tiles and places them on their Claim, one per slot. Take the top 3 Equipment, Personnel and Claim tiles and place them, face up, below the main board. These tiles will form the Auction section. Take the top 5 Gear tiles, placing them face up beside the board. You’re ready to go! 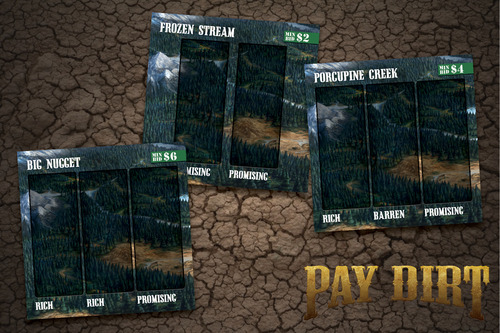 The core of the game is the various tiles that are either put up for auction or that can be purchased. There are 3 types that will be auctioned at the start of every round (Claims, Equipment and Personnel), with the other (Gear) being available for purchase if you send someone to town. Pay Dirt tiles, which are what will give you nuggets, are gained from Claims that are won at auction.

The game uses a simple structure of three separate phases each rounds:

Auction phase: During this phase, the players, starting with the Head Miner (the first player) will place Equipment, Personnel or Claim tiles up for auction, at a starting value of at least the tile’s minimum bid value. In clockwise order, the players can either raise or pass, with players passing being out of the current auction. Once an auction is won, another tile is put up by the player who hasn’t won an auction that is the closest in turn order to the Head Miner. That player can put any tile, except for tiles of the same type as the last tile that was put up for auction. If a player cannot or does not want to put up a tile for auction, they are considered to have passed for this auction phase. This continues until all players either have a new tile or have passed.

Newly acquired tiles are immediately incorporated into the player’s tableau, with any workers granted by Personnel tile added to the player’s workforce, any Claim having the correct Pay Dirt tiles placed upon them and any Equipment tile either replacing any currently operating Equipment (removing any Wear cubes and transferring any Pay Dirt tile) or using it for spare parts (removing an amount of Wear cubes from any Equipment or Gear tile equal to the durability rating).

Work phase: In the Work phase, the players place their workers at the same time. They can be placed:

1) On one of their Equipment, to process the Pay Dirt. Each worker placed on a machine either pulls one piece of Pay Dirt from the previous machine or from a cCaim or moves it one slot to the right, always keeping to the order in which they came onto the machines. Should the Pay Dirt ever hit the last slot of the Wash Plant, it is fully processed and the player finally gets to see how many nuggets it held. They flip it over and take that many nuggets from the supply. Each time a Pay Dirt moves for the first time onto an Equipment, place a Wear cube on the machinery. If the Equipment was to ever get as many Wear cube as its durability rating, while it could still process the Pay Dirt that is currently on it, it cannot load new Pay Dirt. 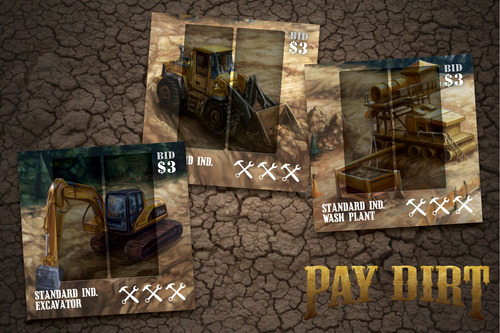 4) Send a worker to town to purchase a Gear. Note that a player can only have 1 Claim Gear and 1 Camp Gears.

Once everyone has placed their workers, the Head Miner then activates all their workers in any order they choose. Thus it is possible to process some Pay Dirt and repair the Equipment right after or pull a Pay Dirt into the last step of the Wash Plant so as to get some nuggets to sell right away. Once a player is done, the next player then takes their turn activating all their workers.

Hardship phase: During the Hardship phase, the player with the least nuggets takes a number of Hardship cards equal to the number of players. They choose one card and pass the rest to the person with the second least amount of nuggets and so on until all players have a card. In the case of a tie, the player closest to the Head Miner picks first. All players then enact the Hardship as stated on the card, with the Head Miner also reducing the temperature by the value in the the top left corner of the card. 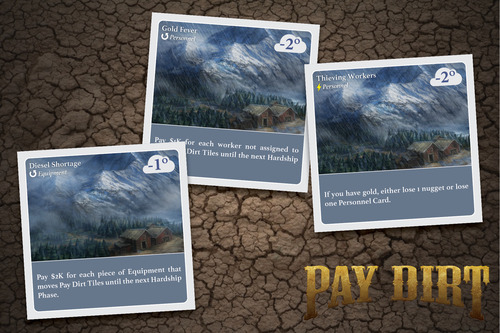 If during the Hardship phase the temperature drops to 0 or lower, the ground freezes and the game lasts one more round. At the end of the last round, the players can wash one last Pay Dirt, namely the right most one. Players flip that last Pay Dirt, look at how many nuggets it is worth and subtract from this value the distance to the Wash Plant and  takes that many extra nuggets.

If the temperature isn’t at zero, simply refill the Equipment, Claims and Personnel cards to 3 each, add enough Gear cards to bring their total up to 5 and give each player $2, as a government subsidy. Pass the Head Miner token to the next player and start a new turn.

At the end of the game, the player with the most gold nuggets wins.

I like Pay Dirt. I like it quite a bit actually. At the surface, it looks fairly simple, with the auction at the start, the simple worker placement and finally the decisions brought about by the Hardship phase. When you dig a little deeper, the interaction between the different elements in the game start to shine and one can see the depth in the game.

Not that Pay Dirt is a very heavy or deep game, but what there is presents a nice decision space to the players. Take the auction phase for example: while there is a possibility of three different type of tile that can be auctioned off, the real choice will most of the time boil down to whether you want an extra worker (flexibility in what it can do) or get a better Equipment, which will (most of the time) reduce the amount of time it takes for a Pay Dirt to pay off. In this case, the real decision is between flexibility (since you can always use your worker for other things than operating your Equipment) vs getting rid of Wear and making your production line shorter permanently. 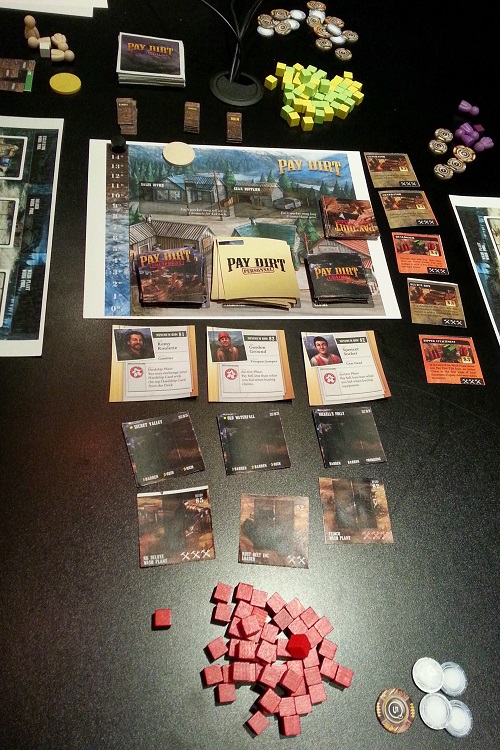 This aspect of deeper strategy is present in each phase of the game: do you send one of your worker to the village to sell some nuggets, thus reducing your victory points so that you can get more money to be able to get better Equipment/Personnel/Claims? Which Hardship do you choose and which do you allow the Head Miner to get/select when you’re the Head Miner? A lot of small decisions, which don’t seem that heavy when you’re playing but still end up being significant and fun to take.

The decision to allow the players to place all of their workers at the same time is a stroke of genius since it speeds up the game in a significant way, stopping a lot of the analysis paralysis from happening as in other worker placement games. There will rarely be a time where what is placed where will really affect the other players, which might cut into the interaction, but you’ll get that in the Auction phase and to a lesser degree in the Hardship phase.

I do also like the way the Pay Dirt tiles end up being on a conveyor belt and the players not knowing what they will get until it reaches the end of the line. It adds a little luck to the game, but with each type being worth a different range, you have an idea what you’ll get.

So what you end up with is a nice introduction to worker placement games, a nice light to mid weight game that can be explained and played quickly. It helps greatly that the theme and mechanics are so nicely integrated. Can’t wait for this game to actually come out so that I too can play with a nice version. What are you waiting for, go back it already!