Space, the final frontier, or at least the latest frontier in micro-games. Not too many micro games do space well (there is Pocket Imperium that is quite neat however) and even less do hand/deck management. Granted, there aren’t many hand-management games out there in the first place, with it being similar to deck-building. In hand-management, you grow your hand of card and thus what you can do, but you never shuffle your cards. 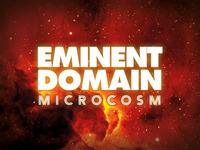 Eminent Domain: Microcosm not only does space and hand-management, but does it in a micro-game kind of way. The latest in the Eminent Domain line (which right now only includes Eminent Domain and expansions, but will soon add Eminent Domain: Battlecruisers), it plays really well while maintaining the main flavor of Eminent Domain. Is it fun? Let’s check it out!

In Eminent Domain: Microcosm (Tasty Minstrel Games) by Seth Jaffee, 2 players are battling for domination of the galaxy. They  do this by drafting cards into their hands and using the actions on the cards to either gain new planets, discover new techs or manipulate the cards that can be drafted. Like Eminent Domain, the card drafted is immediately available to be played and will be used to boost actions, do actions and as victory conditions at the end of the game.

The game is a fast playing set-collection game and will last anywhere between 15 and 20 minutes. Rules explanation should be doable in about 2-3 minutes.

The version of the game I have is not the final version, but rather a print-and-play version that is available on the Kickstarter page. As such, it is subject to changes as the game gets closer to publication.

The game is made up of three sets of cards: a deck of 18 Domain cards, which are the cards that the players will draft and use for actions on their turn; a set of 8 planet cards, which will start face down and which the players might try to colonize or conquer; and a set of 5 Tech cards, that can be used to boost actions or as extra VPs at the end of the game. The cards are clear and the layout is clean. I cannot comment on the artwork as the pnp version has none.

The game also comes with a single page of rules, which clearly lay out what the players can do in the game. While this might seem like a short ruleset, it is plenty.

To set up, simply shuffle all the planet cards face down (ie, the exact planet effect being hidden, with the cost to colonize showing) and dealing them all in the middle of the table. Place all the Tech cards beside them. Shuffle the 18 Domain cards, dealing 3 of them face up as a draft row, with the remaining deck face down beside them. Select a first player and you’re ready to go.

Before looking at the rules, let’s look at a Domain card in more details. There are three key pieces of information on a given card: at the top left corner, a symbol that is used to “boost” actions when revealed, with right below it a planet of the same color as the color band that runs down the left side of the card; a VP symbol on the top right of the card along with the conditions for getting the VPs; and finally the Action text, which indicates what the player can do when this card is played. 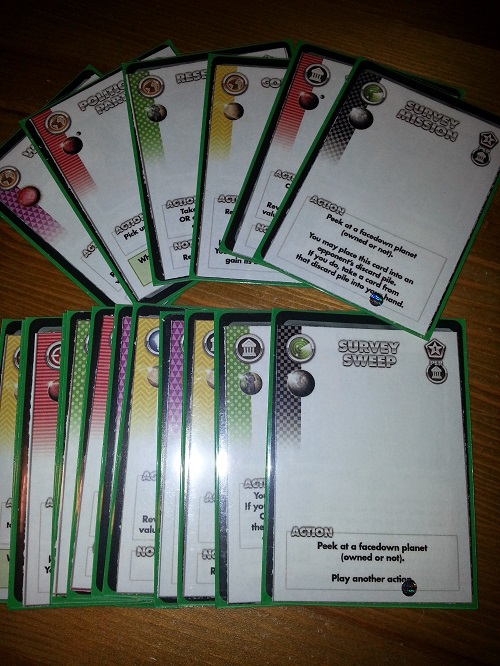 On your turn, take either one of the 3 face up cards or draw the top card from the draw deck, adding it to your hand. Now, you can either;

a) Play one of the cards from your hand to take the action stated on the card or;

b) take your discard pile back into your hand.

Once this is done, add a card to the face up Domain cards so that there are 3 face up cards and let your opponent take a turn.

The game ends when there are no cards left to draft (ie, after both players have had 9 turns). At this point, look at all VP symbols and score points according to the conditions stated. For example, if you have a card that states +1 VP per Planet, you would score 1 VP for each planet that you have colonized. Total your VPs and highest total wins!

I really like this game: it is very simple to explain and to setup and, although it is really a set collection game, it does offer a lot of difficult decisions in a very short play time, since a player will only draft 9 cards and have 9 actions before the game is over and the VPs are counted.

Since the cards serve 2 main purposes (actions and end of game vps), each card must be selected carefully. This is something most players forget the first time they play as they attempt to create a good deck or engine rather than keeping an eye on the end of game scoring and in this sense, Microcosm shares this trait very strongly with Eminent Domain. Both games look like typical deck-builders, but in reality are very very short games that are mostly about getting VPs. Because of this, each card you select must either be a card that allows you to get VPs by completing a set that you’re already working on or a card that allows you to turn cards you already have into VPs. Yes, the action that it allows you to do is important, but if the card doesn’t allow you to get more points directly, it is a weaker choice. 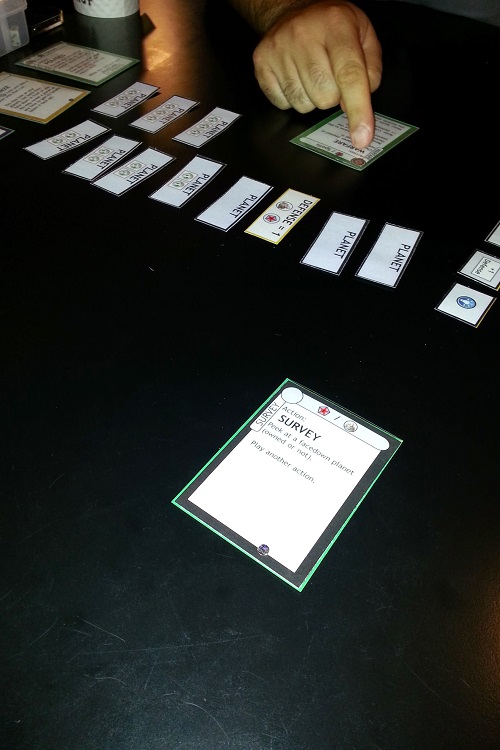 The second hard choice you’ll have to take is whether or not to perform an action or simply take back your discard into your hand. By doing this, you essentially skip one of your 9 actions. This is something that should not be done frequently! 1 out of 9 can make a huge difference at the end of the game, especially if you are aiming at gaining more Tech cards or colonizing/conquering planets. You should probably aim at doing this once per game, more towards the mid-game (after 5-6 turns) since you’ll then be able to regain all of your cards giving you more options for the endgame.

The extra symbols on the cards are only really useful if you are going for a colonizing/warfare strategy or are trying to gain as many Techs as possible. Both are viable strategies, but only if your opponent isn’t trying for the same thing. There really isn’t enough actions in the game to try and go head-to-head against your opponent. Since the game plays with an open discard (the cards should all be fanned so that the content of the discard is known to both players), this allows you to have an idea of what they are doing on their side.

All in all, Eminent Domain: Microcosm is a terrific micro-game that echoes its big brother without replacing it. Cheap, portable, fun, what else could you want in a game? Go and back it now! At that price, you can’t go wrong!