What a week! To think that this contest came about from a shipping error. Well, over 400 of you checked out the contest page and 31 people participated, taking nice selfies of themselves along with a cup of coffee (check out the #dicelovecoffee tag over on Twitter) and I discovered that many of you love your coffee along with your games. Saw some great game collections along the way and struck a few conversations as well. 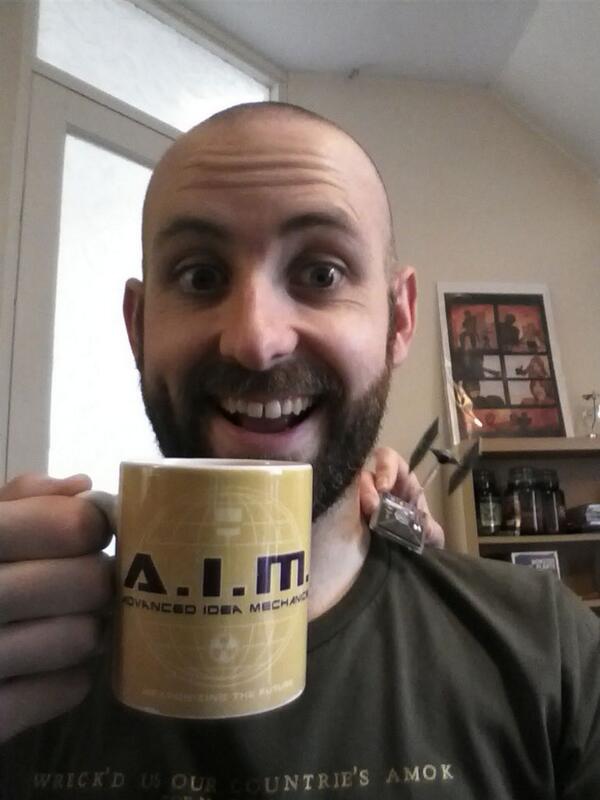 What a smile! I think it has something to do with X-Wings…

Stay tuned because not only will I have a review of VivaJava: The Coffee Game: The Dice Game, but there is another contest coming for the original VivaJava: The Coffee Game, including the Geekspansion! That’s right! The out-of-print, hard to find, pricy to purchase game for free to a contest winner! What will be the contest, I have no idea, give me a few days to think about it…

Thanks again to Chris at Dice Hate Me Games for allowing me to run this contest. Much appreciated and I hope everyone who participated had fun.

Until then, Happy Gaming!

I was one of the backers in the recent Dice Hate Me kickstarter campaign for VivaJava: The Coffee Game: The Dice Game, backing the project for both the new dice game and the original VivaJava: The Coffee Game (I really don’t have a lot of 8 player games and this one looked interesting). I had been following the progress of the game and couldn’t wait to get my copies of the games.

Imagine my surprise when one day, Tanya, my lovely wife, tells me that I had received two big boxes from the US. I knew that I had one box coming in for the games, but two? What was in that second box? She told me that they were from the same place and it made me even more curious and could not wait to get back home to see if I had received some other kickstarter that had forgotten to let us know that the game had shipped.

Imagine my surprise when I found that the games had been double shipped! I love games and VivaJava, in both incarnations, looked like superb games, but I really did not have any use for two copies, unless…

Yup! The very first Strawpixel contest is born! I asked Chris over at Dice Hate Me Games if he would mind me doing a contest with the copies instead of sending them back and he graciously accepted. So, here we go!

How can you participate? Well, we won’t just do a boring contest, with people posting comments or filling in a form. Nope. Let’s be a little more creative. If you want to get a chance of winning a copy of VivaJava: The Coffee Game: The Dice Game, including the Game of the Year expansion, which adds even more fun to the base game you simply have to follow me on twitter (Genialgenius) and tweet to me and Dice Hate Me (DiceHateMe) a selfie of you and your favorite cup of coffee along with the hashtag #DiceLoveCoffee. I’ll pick a winner at random from all the entries. You have until Sunday July 6th at 9h00pm EDT to send in your tweet and I’ll only count one entry per tweet.

I’ll post some of the winning photos along with the winner of the contest on Monday the 7th at 9h00am EDT.

So, what are you waiting for? Let’s see some photos!

I’m currently working on a video overview/review of VivaJava: The Coffee Game: The Dice Game, which will hopefully be out soon.