City building games are an interesting lot: there are those which give you the feeling that you are indeed building a city, growing something bit by bit and those where the looks and aesthetics are more important, where the skyline is king. While there are plenty of the later (Carcassonne, Alhambra, Manhattan), I’ve always felt that there wasn’t enough of the former, with just a handful of games that seem to concentrate more on the economic engine feel rather than just looking the part. 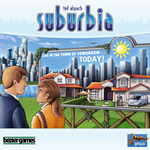 For me, a true city-building game has three elements: the city has to grow, with new neighborhoods being placed down, its outer boundaries moving; the different neighborhoods need to have a logic to where they are placed, they have to have a certain synergy; the growth has to be represented in many factor, not just size. As such, Carcassonne and its ilk don’t really fulfill these factors since they are simply graphical representation, without the multi-dimensional aspect to them. Luckily for us, Suburbia comes to the rescue with a simple, yet challenging, city-building game.

Suburbia (Bezier Games) by Ted Alspach is a city building game for 2 to 4 players in which players compete to build suburbs that will attract the most residents. To accomplish this, they will expand their suburb one tile at a time, trying to gain income and reputation, which will turn into money to purchase new tiles and new citizens showing up each turn. The game will go through 3 distinct phase, with the tiles becoming more and more specialized and being worth more and more money, with the usual growing pains of a suburb rearing their ugly heads.

In the end, the player who has attracted the most people, including some long range goal they had set up at the start of the game, is the winner. 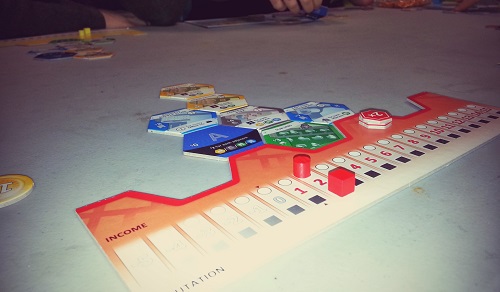 Suburbia: all quiet in the suburbs…

This box is pretty packed, with 132 hexagonal tiles (broken down into A, B and C tiles as well as 3 types of basic tiles), 20 goals token, a game end hexagonal tile, lots of coins tokens, 4 player boards and various tokens to track income, reputation and population levels.

The game also comes with two 4 pages booklets, one for the rules and another one with every single tile and goal tokens, which is very much appreciated. The rules are clearly written, with lots of examples and variants, including a solo variant.

The artwork is clear, with nice icons for each type of tile and I believe that the color choice is color-blind friendly. The tiles can easily be read at a distance and are of a nice thickness, which should easily hold for many, many games.

All in all a very nice package.

Set up is pretty simple: each player takes a player board along with one of each of the basic tiles (Heavy Factory, Suburbs and Community Park), which he then places on the top edge of his player board. Shuffle stack A, B and C separately and draw a number of tiles based on the number of players, including the One More Turn tile in stack C. Fill the Real Estate Market with A tiles (the newer the tile, the more expensive it will be to buy right away). Players then take $15 from the bank, place their Population, Income and Reputation tokens on the various tracks. Shuffle the Goals tokens, placing a number of them depending on the amount of players and give two to each players, who will then chose one, returning the other one to the box without revealing it. 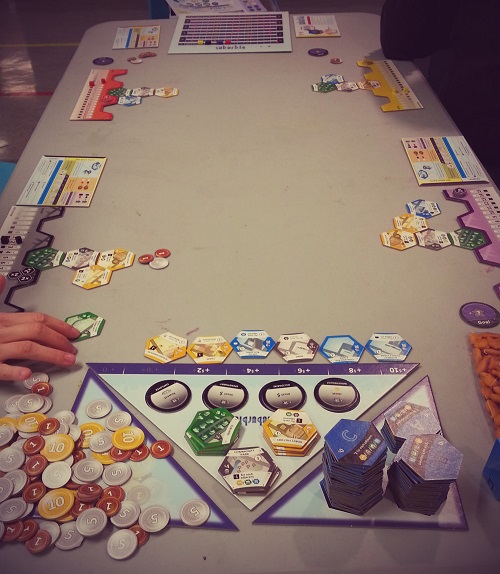 Suburbia: The game is afoot…

On his turn, a player will:

No matter what action the player takes, a tile will have to be removed from the Real Estate Market and the cost for its position paid to the bank. Apart from that cost, the cost of the tile will also have to be paid, with tiles coming from the basic set being the cheapest and the same with Lakes (simply the reverse of any tile, the cost is $0). The cost of a doubler is the initial cost of the tile.

Once purchased, the tile needs to be placed in the player’s city  and the effects resolved. A tile might have an effect when placed and it might also trigger various effects in the player’s city or other players’ city. There are three levels of effect: adjacent; your city;  and all cities. As well as a cost and effect, each tile has a color denoting its general family as well as a name and sometimes an icon, which denotes a specific sub-type of tile. In general, a tile will have an immediate effect (money or population change) or more long term effect (Income or Reputation modification). All tiles must generally be checked when a new tile is placed as its placement might trigger a tile that was already present. For example, the Municipal Airport gives you +1 Income for every Airport, meaning that any tile with the Airport icon placed for the rest of the game in your or anyone else’s city, will increase your Income by 1.

Players then collect their income (if it is in the negative section, they have to pay the bank or lose some Population), modify their Population based on their current Reputation (again, they will lose Population if their Reputation is negative) and adjust both Income and Reputation if they have crossed a red line on the Population track. They end their turn by placing a new tile in the highest position on the Real Estate Track.

Play proceeds until the One More Turn tile is pulled up, at which point everyone gets one more turn, once the First player gets his next turn. Open goals are then awarded (no one gets the Population bonus on ties), followed by the secret goals. Highest Population wins.

I like Suburbia. A lot. It has just the right mix of elements that make my brain hurt, but in a good way. The difficulty of the decisions nicely curves upward as the game progresses, while keeping the amount of decision per turn to the exact same number: one. You can do one thing, and one thing only. Of course, that one thing can be the purchase of any of the tiles in the market, making any of these tiles into a lake, getting one of the basic tiles or doubling any tile in your table. While knowing what to buy at the start of the game is fairly simple (after all, there aren’t that many implications in your purchase), as the game progresses, you need to keep a close eye on what you have and what other players have, since you do not want to give too many bonuses to others.

While the pure purchase of the correct tile seems simple at first, you still need to keep in mind how it will affect both your income and your reputations, and of course your overall population. You need to keep a careful eye on the population track as well as crossing too many red lines in a single turn can really hurt you in future turns (shades of Age of Steam here, which Bezier did a metric ton of maps for). Making sure you’re setting yourself up for some nice bonuses in future turns is also a lot of fun, but be careful to leave yourself some space as it is easy for others to really mess your plans.

I’ve played twice so far, once with 2 players and once with 4 players. While the usual comparison can be made (more control with 2 than 4, less problems with looking at what a tile placement affects), both games were very fast and all players were equally engaged in both games. The learning curve seemed fairly shallow, with all players quickly picking up on what they had to do. The biggest issue is probably the secret goal and even that was simple to understand. I’ve yet to try it out in solitaire, although the odds of doing so are fairly low since there are a lot of better solitaire games out there. 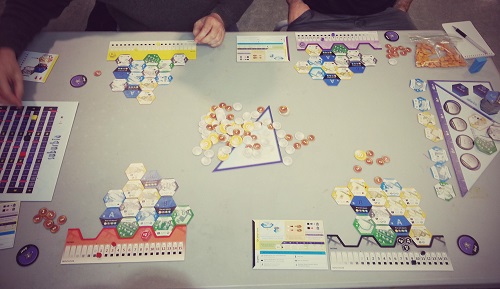 I really can’t wait for the iPad/Android version since it will take care of the one aspect I have issues with, namely the fiddliness of the game when it comes to tracking icons and consequences. The problem really lies in the fact that while most tiles affect only the tiles that surround them, some of them are affected by tiles in your city or, harder to track quickly, the tiles in other players’ cities. It is very easy to miss some of the other players’ tiles when counting, or take too much time figuring out what would be optimal for you when you need to look at 10 to 15 tiles per player. Remove that little issue and the game becomes a pure game of selecting a tile, placing the tile. Sort of a Carcassonne on steroids, if you would, but with more choices and more impact for your choices.

While this may not be the simplest game to play well, it is fairly simple to explain and get playing. It plays quickly for it weight and should make happy players who are looking for a new challenge as well as some of the more hardcore boardgamers out there. An excellent game.