In the late 1990s, when I started getting back into boardgames, the first few that I discovered were pretty much the standards of the time: Settlers of Catan, El Grande, with some Magic, Illuminati and the like thrown in. When the 2000s started, meatier, and yet still simple, games started to emerge, like Princes of Florence, Puerto Rico, Stephenson’s Rocket and Liberte by a certain Martin Wallace. This last title fascinated me simply because of the multiple path to not only victory, but also to ending the game. I remember many an evening playing this, walking the knife’s edge in trying to put myself in a position to win without pushing the game too far lest one of my opponents push it over the edge to score a win. 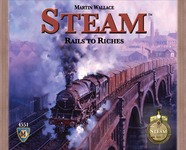 Naturally, when Wallace’s next title came out I was intrigued. I had hoped that it would be as unforgiving as his last title and as deep without being overly complex. Boy did he ever deliver! Age of Steam was everything I had hoped for and more. Not only was it cutthroat but it was also unforgiving, with one minor misstep causing you to go bankrupt and be out of the game. It also had something else that fascinated me: different maps. Simply using a different map and using maybe some rules modification, you got a whole new experience, forcing the players to change their strategy. I fell in love but with a harsh mistress. The game was perceived by many in my different gaming groups as too difficult and unforgiving. While I managed to play it, it still sat almost forgotten, that is until it came back as Steam, published this time by Mayfair Games. Was this a good thing? Well, let’s find out.

END_OF_DOCUMENT_TOKEN_TO_BE_REPLACED

In what I’m hoping will be a regular feature on Strawpixel, here’s the first Time Lapse Replay of a session we had a few weeks ago. This first game is Steam (Martin Wallace, published by Mayfair Games) and more specifically the Underground Railroad map (Ted Alspatch, published by Bezier Games).

I love Steam and I don’t get to play it often enough, even though I have a ton of maps for it (even the one for the Montreal metro!)

I’ve started a Youtube channel for all of the replay videos and will be posting more in the coming weeks (I’ve got Hegemonic, Conflict of Heroes and Space Empire 4X already shot and just waiting to be edited).

If you like what you see, please subscribe to the channel and upvote this article and the website over on BoardgameLinks. I can always use more traffic!

I need to figure out how to embed video instead. Problem is, the file is slightly too big to upload directly… oh well, will figure it out