Arkwright (Spielworxx) by Stefan Risthaus:  This is probably one of the heaviest economic engine game I own and boy do I not regret picking up a copy of this. The game puts the 2-4 players in the roles of industrialists in England at the turn of the 18th century. As such, they will decide how to operated up to 4 different factories: how many people to hire, whether or not to install heavy machinery and replace some of the workers, whether to create publicity or improve the quality of the goods in order to increase demand and what price to set the goods at. They will also have to compete with an outside interest that can take some of the demand for their goods away as well as figure out whether or not to risk sending goods abroad for some quick cash but at a cost to their stock value.

The game is not only heavy gameplay-wise, but physically as well, coming in a deep box that is full of cardboard. While the included materials are well done, it is not the most striking of games, looking more like a giant spreadsheet. The 3 rulebooks(!) could be a little clearer, but are better than the standard Spielworxx fare. The fact that the game comes with a simplified, 24 pages rulebook (Spinning Jenny) as a sort of tutorial should indicate the weight of the game. 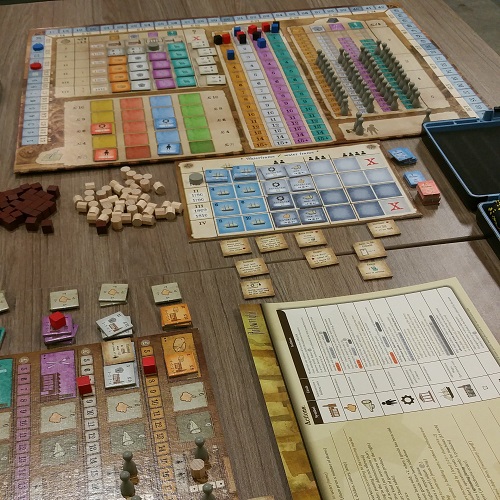 Arkwright – Bring on those delicious headaches

This so far as been easily one of my top game of the year, having played 3 games since getting it in early January. While it’s not easy to wrap your head around it the first time you play (actions are simple, but knowing when to do what when is tough), it nonetheless has a very logical structure and you’ll understand how things work quickly enough. The game is heavy mostly due to the low amount of decisions you’ll make (4 decisions per decade, 5 decades if you don’t count the first which is setup). There is also very little downtime between turns and you do want to look at what the others are doing when you’re not playing. Highly recommended.

Isle of Trains (Dice Hate Me Games) by Seth Jaffee and Dan Keltner: This one is to me perhaps the best card games released so far from Dice Hate Me Games. Don’t let the game art fool you, this is not kids’ fare but rather a clever multi-use card game. This is a pick-up and deliver game, where the players are putting together different types of trains to take some cargo that they can then use to complete contracts. Fairly simple and straightforward, and all in 52 beautifully illustrated cards. The game is small enough that you can carry it anywhere, and the rules are clearly written.

There are two types of cards in the game: contract cards, which are double-sided and are the main way you’ll score points; and train cards, which represent cargo, train cars as well as being used to pay for the train cars. On your turn, you can either draw more cards; fulfill a contract by having the correct goods loaded on your train; load one of your cards onto a train car (either yours or someone else), as long as you have the correct cargo; or add a car to your train, paying the cost by discarding a number of cards from your hand. The big twist in this game is that you can not only load your own train, but you can also load other people’s train. Why would you do this? Well, loading other people’s train grants you bonus cards and/or actions.

The game borrows many little mechanics from other games (paying by discarding, multi-use cards), but with the “load any car” option, this is where it truly shines. This can bring some very interesting decisions, especially when you *need* that extra draw to do what you want but fully know that you’ll be giving your opponent the last cargo they need. Fast, scales well for 2 to 4, well worth getting. 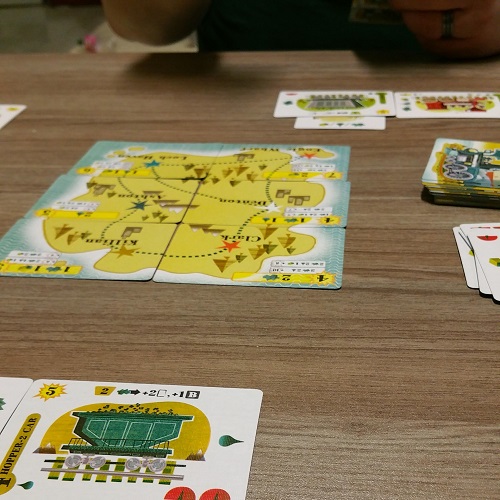 Isle of Trains – deeper than the card count would show 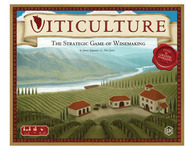 Viticulture (Stonemaier Games) by Jamey Stegmaier and Alan Stone: Viticulture, like Vinhos, is a game about making wine, or more specifically in this case, running a winemaking operation. It is a mid-weight worker placement game with some depth to it and which can be easily taught and played in under 2 hours, and can be completed in probably 1 hour with the right group. The game production is beautiful, with a beautiful board, some really nice cards and an assortment of superb wooden playing pieces. My copy is part of the deluxe Viticulture/Tuscany box, so it also came with some great metal coins. Beautiful production all in all and it simply makes you want to play it. The rulebook is well done and easy to understand and works well as a reference (the game also comes with a very complete double sided reference card, which is more than adequate during the game).

The game turns are dubbed “years”, with each year being broken down into 4 seasons. In the Spring, players simply decide when they want to wake up their worker (set turn order), with different bonuses the later you wake up. In the Summer, players are able to send their workers to plant some vines, build new buildings, use some of their summer visitors (cards that grants special actions), give a tour of the wineyard (get some money), get vine cards or sell some of the grapes that have been harvested. This being a worker placement game, the spaces are limited and if you are the first player to set your worker in a specific area, you’ll be able to gain a bonus. During the Fall, each player will be able to gain an additional Summer or Winter visitor. In the Winter, players can harvest some of their fields, turn grapes into wines, fill some of the wine orders they may have, train a new worker, play a Winter visitor card or gain new wine orders. Note that you will not be getting back any of your workers that have been used during the summer, so any worker you used in Summer will not be able to be used during the Winter phase.

The key to the game is the planting of vines to make grapes, harvesting them and then turning them into wine. The rules for this are rather straightforward and encourage the players to sit on some of their grapes or wines since they will mature and thus become higher value than when they were harvested or bottled.

While the game is a worker placement game, the real heart of the game is the various cards that you get. The vines you’ll plant are simply cards you draw, with different cards granting either red or white grapes of values 1 to 4. Planting them is as simple as putting them down in one of your three fields, but making sure they never add up to more than 6. Since when you harvest the grapes the vines stay there, you want to make sure you’ll get good use out of them and that you plant the right combination of vines. The wine order cards are very simple again: they tell the players what is the minimum value of wines they will accept and what type of wine they are looking for (white, red, blush or sparkle). This will grant the player a few victory points and some residual payment, which they will get at the end of every year. The last 2 types of cards, the Summer and Winter visitors, are simply more powerful version of the actions on the board.

I really like my first playing of this game. It is simple enough that it can be explained quickly and it is easy to understand. It flows very well and doesn’t overstay it’s welcome. I’m very much looking forward to playing again and to try out some of the extensions that come in the Tuscany box. 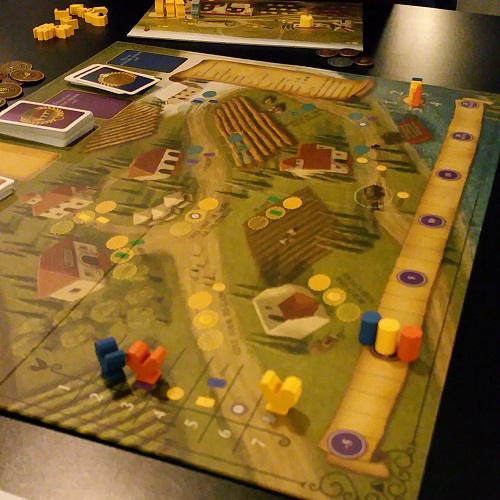