Either there’s been a lot of discussion about what is and what isn’t a micro or I hang out with people who are obsessed with board games. No matter, I find that quite a interesting discussion. Apart from those who deny that they exist at all (let’s call these people Jason), most of the definitions seem to give more of an insight into the person than the games themselves. There are those who claim that simplicity and game length defines a micro; others claim that footprint and components define a micro; other claim that they are nothing new really, that they have been around for a long time. There’s some interesting conversation to be had, that’s for sure but at the end of the day, micro or not, they are games and they live or die by whether they are interesting and can stay interesting.

AEG is one company that has been doing real well with this resurgence of the micro: first came Love Letter, then Agent Hunters, with Mai-Star and Cheaty Mages following closely. And then the moment I’d been waiting for some time, the release of Sail to India, a micro-sized game that contains a huge game. Is it a micro since there isn’t a lot of components and the footprint is fairly small? Maybe, but on the other hand, the game is meaty and the playtime is around 1 hour, even with experienced players. But more important, is it fun? Let’s find out! In Sail to India (Alderac) by Hisashi Hayashi, the 3-4 players are nobles who are trying to become the most famous patrons of explorers who are trying to be the first one to find a route to India. As such, they will finance expeditions to both discover new lands and create trade routes in order to fill their coffers and gain glory.

While the above description is fairly generic and could describe a lot of Euros, what the players are really trying to do in Sail to India is to maximize their very clever economic engine by purchasing “workers” (or wooden cubes, really) who can then become either ships, bankers, buildings, historian or trade goods. What emerges is a game of min-maxing, where the very simple wooden cubes, can be one of several things, all depending on how the players use them. The game plays 3 or 4 players and can be concluded, including rules explanations, in about an hour.

The game comes in a very small box with a fairly generic image of a sailing ship on the cover. Inside the box you will find a stack of Tarot size- cards, including: 1 Lisbon (Lisboa) card; 12 location cards; 4 tech cards; 4 player aids; 4 Historian player card; 4 player Domain cards. Also included is 4 sets of 13 player tokens and a rule book. 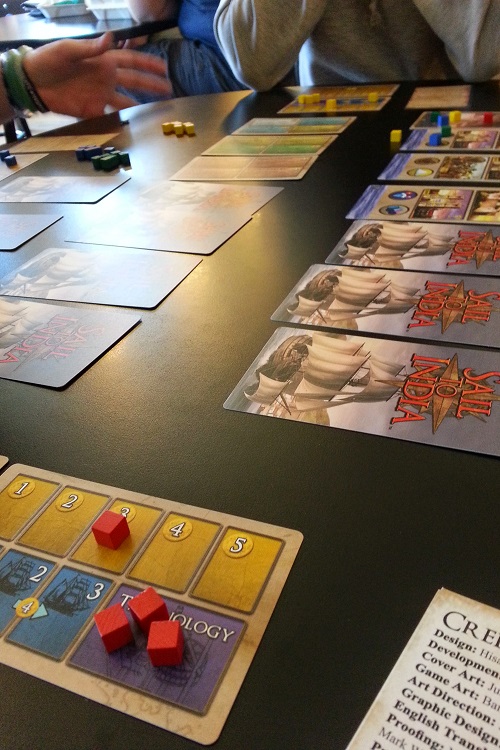 Sail to India – Not a lot on the table, but lots in player’s brains

The rule book is fairly straightforward and easy to understand. It is easy to consult during the game should you have any questions that are not covered by the fairly thorough player aid (except for 1 thing: the cost of buildings). All in all the materials are very solid and of good quality. The cards illustrations are nice and practical and the card stock should live up to many plays.

Set up is super easy: give each player 1 domain card, 1 historian card, 1 player aid card and 5 token of their color. Players then place three of their tokens on the Tech space, 1 one on the 1 Speed space and place the last one on the 2,3 or 4 on the Bank space, depending on the player order. Place all other tokens near the center of the table. Place the Lisbon card near the token and place one of each player’s token on it. This is their starting worker. Shuffle the location cards, dealing the first three face up in a row beside Lisbon and laying down the remaining 9 face down, also all in a row. You’re ready to go!

The key to Sail to India is the humble cube: since it is the only component of the game apart from the game cards, it can represent a myriad of things, depending where it is placed. Should the cube be placed on the Historian card, it represents a number of victory points. On the Domain card, it can represent coins or cash (the top track), speed of all the player’s ships (the Speed track) or how many tech the player can still purchase. Any cubes on the Lisbon card represent available workers. Cubes that are placed beneath a location card are ships, and the same cubes, but placed either on one of the 2 buildings or 2 trade post are either Buildings or Trade goods. So, the same cube can become a number of things during a single journey, depending on how the player uses them. It can start as a worker (on Lisbon), turn into a ship (Sail beneath location cards), turn into a trade good (placed on a trading post during Sailing) and finally back into cash (Trade action).

Sail to India – the cards; Location; Historian; Domain; and Tech

The turn order is very simple. You are allowed to perform any 2 actions from the following list of actions. Both actions can be different or they can be the same. The actions are:

Once a player has performed their two actions, play proceeds to the next player clockwise. A player can always use a tech during their turn, if the tech allows it, or recall all workers to Lisbon for free. 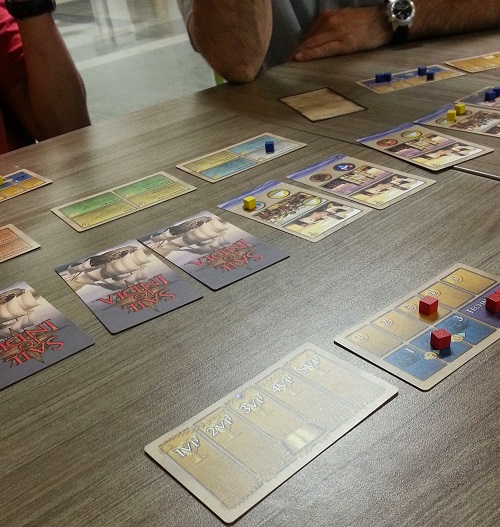 Sail to India – another tense game

The game will end if one of two conditions comes true: one player has turned over the last location card (they have discovered India), scoring 2 points for the discovery instead of the regular 1; or if 2 players have employed all of their workers. Once the game end condition have triggered, everyone gets one more set of actions, save the player who has triggered game end. Tally up your points for buildings, on your historian card and any bonus that have been gained from tech. The winner is the player who scored the highest total, with ties going to whomever discovered India.

This is maybe the best game I’ve played all year. To say that my expectation where high when I ordered this little box would be an understatement. I had heard a lot about it since it first debuted in Essen last year and couldn’t wait to get my hands on it. Yes, part of the expectation were based on some of the excellent micros (and not-so-micros) games coming out of Japan and Asia, but this one had something special about it. Economic engine in just a few cards and tokens? Well, if it was half as good as I expected, it would be a keeper.

Never mind that the game fits in such a small box that you can easily throw it in your bag and have it ready to play at a moment’s notice. The rules are pretty simple and can be explained in maybe 10 minutes, less if you’re dealing with experienced gamers. But the possibilities that open up once you get your engine going are pretty staggering and that’s where the game really grabs me.

At the end of the day, Sail to India is really all about optimization and decision space. As a player, you will only have a maximum of 9 cubes to play with at any given time (you get 13 cubes, but 3 of them are taken up by Tech and 1 is used for speed). Those 9 cubes can be anything you want them to, be it buildings, historians, bankers, trade goods or ships, but they can only be 1 thing at a time and you will have to spend a precious action and some money to get more. And you will need more since you start with only 1 (plus 1 banker, but that’s not that great, really). Of course, while it’s great to hire more workers and thus have the possibility of sailing more ships, it also brings you closer to the end of the game since should 2 players hire all their workers, it will be all over but the crying of the losers. At very least, your workers can switch professions at any given time, right? Should be simple, no? 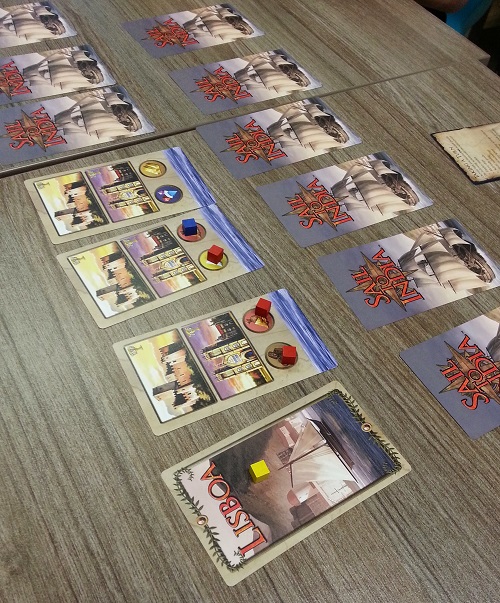 Sail to India – All lined up

Well, no. Everything about this game is timing. When do you accept to turn a cube into a permanent historian? Do you accept to sacrifice 2 or (gasp!) 3 of the 9 as historian? They would represent 15 points (maybe), but then, you would have 3 less cubes to discover new cards or turn into building. What about having a bunch of ships? Great, now you can get lots of trade goods, but when you bring them back home, you might need to sacrifice 1 or 2 to become either bankers (for that new money you get) or historians (for those VPs you get). Sure, you can refuse to gain money or victory points, but without money you won’t get far and without victory points, well…

In a lot of ways, this game reminds me of a particle accelerator: you shoot your cubes onto a circular path (sail from Lisbon onto the location cards to occupy trade location, then call trade to bring them back home to increase your money, repeat) until you decide to suddenly push them in a different direction; boom, they are now a historian, recording victory points; boom, they are now a building, specifically a stronghold to give you an alternate spot from where to ship out from, and some VPs at the end of the game; boom, they are now a banker, giving you some funds to hire more workers, or create buildings or gain tech. Do this too early and you’ve lost a ship/trade good to gain that extra cash that you need, putting the brakes on your economy. Wait too long and someone else will snap up the building or the tech, forcing you to come up with a different plan.

Oh yes, almost forgot about the tech. While this might seem at first like something you can sort of ignore until the end of the game, in reality, they are very important if they are used wisely. They remind me a lot of another classic, the venerable Puerto Rico. Since only one player can have any given tech, they can confer on the owner a great advantage. The simple ones are the 4 techs that grant you extra VPs at the end of the game, and more specifically the ones that give extra VPs per specific building. Those are usually good for an extra 8-10 points, if the player was paying attention. The other techs can be powerful if they are used wisely and purchased at the right time. But again, the player will hit that dreaded limitation, the 2 actions per turn: when is it really wise to sacrifice an action to gain a tech? At least, in the case of gaining extra speed, the decision is simpler: as soon as possible!

And all those simple decisions with their many ramifications is what I love about this game. You get to try and optimize this little precision engine while dealing with the chaos brought about not by luck, but by the actions of the other players. It is possible to reduce said chaos by trying to out-guess what the next player might do, but the problem is the other 1 or (worse) 2 players. While they cannot affect you directly, they can still do little things that might stop you from pulling off your perfect strategy.

All in all, this is a “headache in a box”, my favorite kind of game. Sail to India includes strategy for long term planning, short term tactical decisions and just a little bit of luck, but plenty of chaos. If you love you economic games pure, this is one to get.