Way back when I was in college I used to have two different games in my bag at all time, just in case we’d want to play something while we were at the pub instead of being in class. The games were fairly simple: Red Empire and Car Wars the Card Game. While they were somewhat portable, the boxes were ditched fairly quickly in favor of plastic bags, making them even more portable. As I got older and the games I played became more complex, I stopped carrying games in my bag unless I knew I was going to play something that day.

A funny thing happened a few years back. Not only did I get back into gaming in a more serious way, but a bunch of small (micro) games started coming out, with of course Love Letter at the forefront. Not only were these games simple, but they were small enough that I could carry one or two in my bag at any time. Well, someone has gone and done it a step better: Chris Handy has come up with the Pack O Game, a series of games so small that you could carry all six of them in your bag without making the smallest bump. Small is good, but are the games any good? Let’s check it out!

The Pack O Game series (Perplext) by Chris Handy is a series of tiny, little card games that come in small boxes. Scheduled to go up on Kickstarter on August 4th, 2014, it is a grouping of 4 (possibly 8 with the stretch goals) small games that are simple ideas that can be played quickly and taken anywhere. Although I only have two in my possession (GEM and TKO), I suspect that all of them together would be about the same size as a pack of cigarettes (and much healthier for you too!). Oh, I’d like to thank Chris for being generous and accepting to send me the two games. Much appreciated!

In GEM, the 2 to 4 players attempt to collect the most gem cards as well as having the most of a given type. It is a simple bidding game that lasts anywhere between 15 and 20 minutes and that is light to moderate in complexity.

The game comes in one of the smallest package I have seen: the box is roughly the same size as a pack of gum (like 1/3 of a regular playing card, cut lengthwise) and maybe half the height. Inside you’ll find a double-sided, folded rule sheet and 30 odd cards. 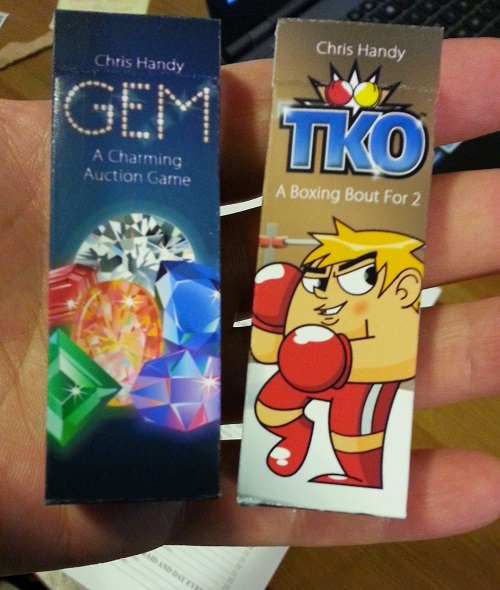 Pack o Game: Not, my hands are not that big!!! (games are actually smaller in real life!)

The card stock is a semi-plastic card stock which, while thin, looks like it could stand to some abuse. The art style and layout are both very well done, with very clear icons on the cards. The ruleset is, while brief, very clear. We didn’t have any rules questions both after reading the rules and during the game.

I’ll only cover the rules for GEM here. Look for an upcoming review for TKO.

GEM is made up of 30 cards, broken down into two types: coin cards (value 1, 2 and 3), which are given as a set to each player and gem cards, which have 1 or two gems of 6 different types. Each card (both coin cards and gem cards) have two values, one on either end of the card. One of the value is in a green box: this is the Invested value. The other value is in a red box: this is the Leveraged value. 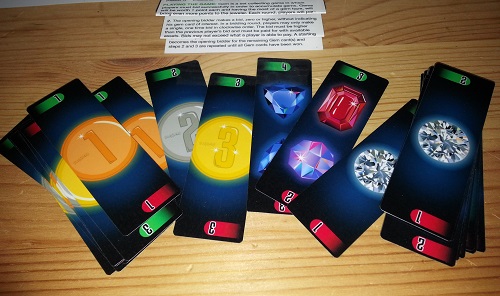 Set up is straightforward: give each player a set of 1,2,3 coin card, which they set with the Invested side pointing towards the middle of the table. Shuffle the 18 gem cards and deal out 6 piles, face down, with 4 in the first pile, 3 each in the next 4 and 2 in the last pile. Flip over the first pile of 4 cards and spread them out. You are ready to start.

Starting with the first player, each player in turn can bid on the right to take one of the face up gem card. To bid, the player simply announces how much they are bidding. They only need to bid more than the previous player and be able to pay for the bid. They do not announce which gem card they are bidding on. This goes on until only one player remains, at which point this player pays for their winning bid by turning a number of coin or gem card they own from the Invested side to their Leverage side. Once the gem card is paid for, they can take whichever gem card from the face up cards and add it to their stash, Leveraged side up (exception: if this is the last turn, the gem card come with the Invested side up). If there are still gem cards to be auctioned, the next player starts the bid.

Once all gem cards have been auctioned, it is time to reinvest. This can be done at the same time or can be done starting with the player who won the last auction. Simply put, the players can use any card that is still on its Invested side to pay to bring Leveraged cards back to Invested. Of course, this causes the card that was used to flip over to the Leveraged side. Once all such cards are paid for, all of a player’s coins cards are flipped back to their Invested side. The next pile of gem cards are flipped over and revealed and the person next to the last player to win a bid starts the bidding anew.

Scoring is very simple: each player gets 1 point per gem on each of his Invested cards, 3 additional points for each set of gems in which they have the most and 2 points for each sets of gems that they shares the majority in with at least another player. Players get no point for Leveraged gem cards and in fact do not count them at all for majority purposes either. The player with the highest total wins the game.

While I haven’t had a chance to play TKO yet, I’ve gotten a few games of GEM in and I must admit that this is a surprising little package. For something that you can carry in your pocket almost anywhere (wouldn’t bring it to the beach, but that’s just me…), it packs a lot of game. Sure, it’s not the deepest, most challenging game out there, but it definitively punches above its weight. 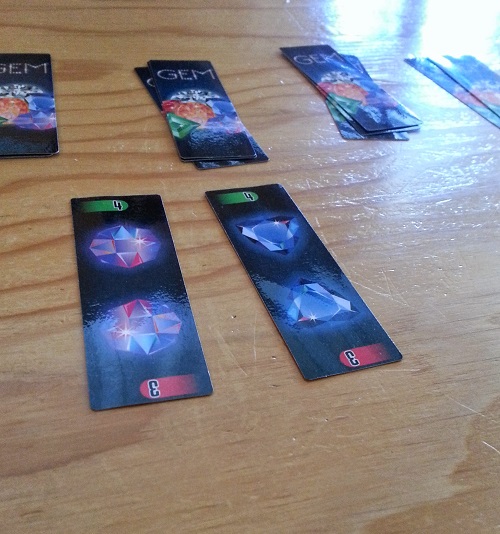 What makes the game interesting is that there are really two decisions you will take during any given auction (bid/pass and how you’ll pay if you win the bid), followed by another decision when it comes to reinvesting. Now, none of these decisions are particularly deep: you’ll bid/increase your bid if you see gems that can be used in one of your sets or deny someone majority. As far as the cash that they can bring to you if you reinvest, there isn’t that much of a spread: they all are 1 less to reinvest than they are worth when used to bid, and they come in three possible value pairs: either 1/2, 2/3 or 3/4, with the smaller number always being the reinvestment number. Keep in mind that the Reinvestment phase does bring an interesting decision as well since all of your coin cards will flip back to their Invested side without having to pay for them. Do you keep some of your coin cards on their Invested side since you’ll be able to use them during the Reinvestment phase or do you use them anyway to gain the big gem cards and live with the fact that you won’t get anything during the next Bid phase? No, the interesting part of those decisions is simply that both the GEMs that you’re trying to purchase are also those that you’ll use, potentially, to purchase more GEMs. And of course, they’re also the ones you use to win the game, should they be on their Invested side. So, while it’s great to grab some more GEMs, it’s also fairly easy to be stuck in a situation in which you either don’t have enough money to reinvest to purchase more GEMs or to score them at the end of the game.

Again, not the biggest, most fascinating decision space ever, but enough to keep you interested for a good 10-20 games, which isn’t bad, really. While the small size is great, it’s also quite simple to explain, even to people who are not gamers. Now, I’m not sure how well the cardstock would hold up to liquids, but this seems like a nice little game to play in your local brewpub, maybe even to see who’ll get the next round. After all, it’s all about being wise with your money, isn’t it?

Should you back the Kickstarter? I really don’t think you’ll find better bang for your buck out there and I’ll certainly be one of the first to back the project.