To say that I love a good train game at this point would be kind of pointless. Between my dabbling with Ticket to Ride, my well-known love of 18XX and Age of Steam/Steam, my discovery of the great Paris Connection and countless other, I love a good train game. One thing I haven’t seen often is a good card-based train game (don’t get me started with a good dice-based train game). Sure Express was pretty good at the time and Yardmaster is an interesting meld of Uno and Ticket to Ride. Even 1830 Card Game is very good, even if the components are… rudimentary. But what do you do when you have 15 minutes to play a good train card game? 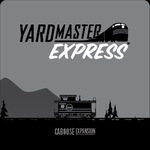 Well, this is the question Yardmaster Express attempts to answer. A short, drafting game that plays 2 to 5 players and that takes about 10 minutes to play. What’s more, it’s very easy to explain and simple to understand. What do you mean, no one had asked that question? Well, so what. I love a good train game. Does Yardmaster Express have what it takes to be one of the good ones? Let’s check it out.

In Yardmaster Express (Crash Games) by David Short, players are owners of train yards, trying to get the highest valued train cars into their yard in order to score the most points at the end of the game. As such, on their turn, they will draft a card from the passing hand onto the table. After 4 to 7 rounds of drafting, the game is over and the player with the highest total wins.

This game is currently on Kickstarter and doing really well, having already been funded and gotten some stretch goals.

The game’s components are pretty simple: a deck of about 50 cards, broken down into three types: train cards, which are divided into two cars of one or two different colors; engine cards, which is every player’s starting card and which includes a rules resume; and caboose cards, which grant extra points at the end of the game to the players who has fulfilled the condition stated on it. 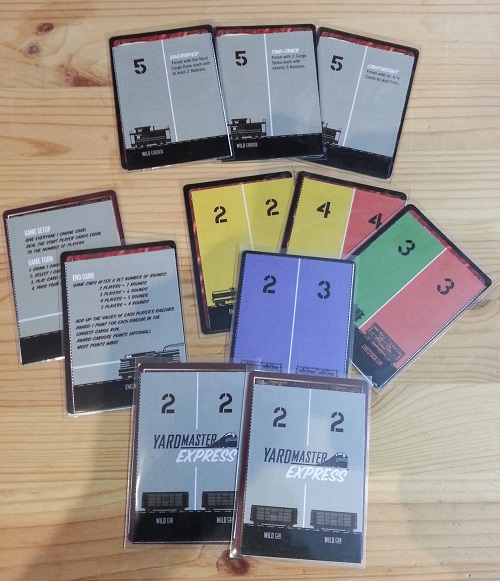 Yardmaster Express: the cards, showing the card backs as well

The rules are short enough that they can be read right before playing and I didn’t have any issue with their clarity.

This is a super simple game. To set up, give each player an engine card. If you are playing with the Caboose cards, shuffle them and deal one to the middle of the table. This card will indicate how the players can score some bonus points at the end of the game. Shuffle all the car cards together and the dealer takes from the deck a number of cards equal to the amount of players. He is the only player to initially get cards.

A player’s turn, starting with the dealer, goes like this:

Note that the only time a player can see the hand of cards is when it is their turn.

To play a card to your train yard, it has to follow a simple rule: it must match either in number or in color. If you can’t do that, turn the card over to the “wild” side and play that instead. After a “wild” card has been played, any other card can attach to it. 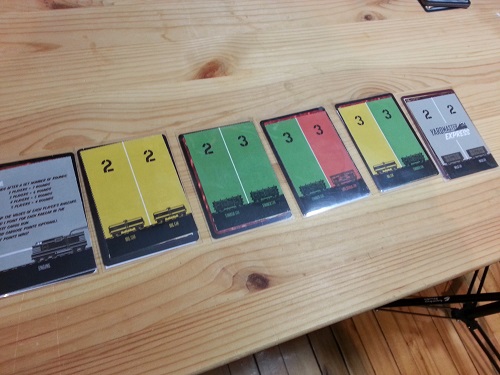 Yardmaster Express – End of game scoring would be 25 (2 X 5 cars + 3 X 5 cars). If the longest train was green, that player would get an extra 3 points

After a set number of rounds (7 rounds with 2 players, with the amount of rounds going down as with the higher player count), points are scored: simply add up all the numbers on the cards, with a bonus going to the player who has the most consecutive cars of the same color (remember, there’s 2 cars per card). The bonus is simply 1 point per car in that run. If you’re playing with the Caboose cards, their bonus is given out at this point as well.

This is a very fast, very simple game of drafting. I do love how the single hand of card going from play to player echos a lonely train going from station to station. There is a very simple elegance in both the rules and the way the game goes forward. Play it with the right group and the game is over in 5, 10 minutes tops and everyone had a nice little game. Play it with even one player prone to AP and what you got is a game that overstays its welcome.

Don’t get me wrong, I really like the game. The decisions are simple, but interesting (when do you go for the big cars? Do you push your luck in one color and hope it makes it all the way back?) and while there is a certain element of luck (cards and card draws), it is somewhat mitigated by the fact that everyone plays from almost the same hand of card.

I do wish the game was a little longer at 5 players (you only get to play 4 cards in total) since it reduces a lot what you are shooting for and may make some of the Caboose cards too easy, but on the other hand, if the game was longer, it might not be interesting. 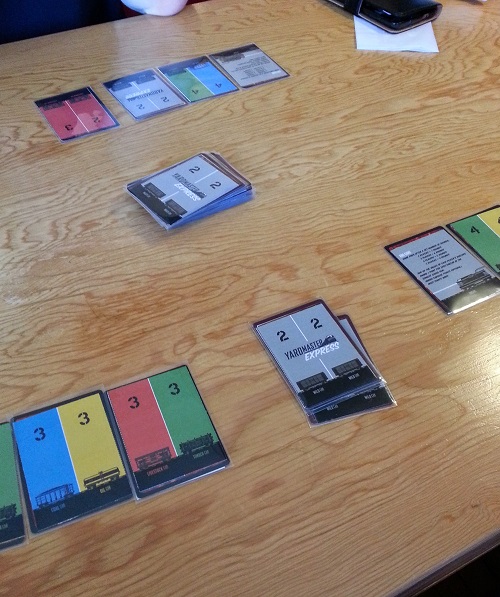 Yardmaster Express – 3 player game. Barely had the time to take the photo…

This is the type of filler which offers just a little bit of challenge, just enough to kickstart the old brain at the start of the evening or allows it to rev down at the end of a longer night. Nice little diversion with no pretension of any real depth.

It is on Kickstarter for a few more days and the value you’ll get out of it is somewhat crazy. Do yourself a favor and check it out.