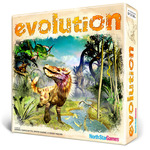 Well, add another one to the list, namely the previously web-published Evolution, a game that focus on two aspects of evolution, namely survival of the fittest and quickly adapting to your current environment. In the fast-growing jungle of boardgames and cardgames, does it have a chance for survival and shine among the new releases or will it fade away quickly, a new species that didn’t have the right stuff to survive? Let’s find out, shall we?

In Evolution (Dominic Crapuchettes, Dmitry Knorre, Sergey Machin) by North Star Games, the players take on the role of nature, as they influence how their different species evolve, by either selecting new traits, growing their populations or growing them in size, in a competition to see who can eat the most and grow the most. The game is for 2 to 5 players and is mostly card based: at the start of each turn, they will receive a number of cards and decide what to do with them. After the cards are assigned and the species evolved comes feeding time! The different species can eat plant food or, if they are carnivores, other species! Once the deck runs out, the game is over and scores are tallied. A game lasts about 30-45 minutes and is very interactive. The game is currently doing really well on Kickstarter, with an October release date.

At it’s core, Evolution is a card game and as such, it comes with a deck of over 100 cards, 25+ Species boards, tokens to indicate the size and population of each Species, a big pile of food tokens, 5 player bags to place the food tokens that have been eaten and a Watering hole board. It also comes with a rulebook and a quick card guide. I can’t really speak to the quality of the components as the copy I had was a preview copy assembled with simple components. The art on the card was more of the placeholder variety and the plastic cubes were hopefully not what will be in the final game. There has been a few preview of the final art on both Boardgamegeek and on the game’s Kickstarter page. The rulebook is hopefully not final, with very little in the way of examples and some rules that are either simply wrong or not clear. Hopefully there will be a longer FAQ done on the card effects since some of them can lead to confusion.

Set up is very simple: give each player a Species board along with a pair of token and a Food Bag. Place one token on the starting space for both Population and Size. Shuffle the Traits card, pick someone to be the first player and you’re ready to go. At the start of every turn, the players receive a 3 cards plus 1 card for each Species they have. Once everyone has received their cards, they must all select 1 card to place on the Watering Hole as their contribution to the food supply for the turn. This card is placed face down and will be revealed once all players have had their card-playing turn. The amount of food contributed by a card is the number in the lower right of the card. The Trait cards represent a different trait that the Species might have and that will hopefully give them an edge to feed more and stay alive longer than the other Species. For example, there are traits that will help with feeding (Fat Tissue which allows the species to eat more; Foraging that grants the species 2 food instead of 1 per turn, etc), turn them into Carnivores (which allows the Species to eat other Species, but more on this later), protect them from Carnivores (Horns, which injures Carnivores that attempt to eat them; Hard Shell, which makes the Species bigger; or Climbing, which protects the Species from non-climbing Species, etc). Species start with no Traits, but as the game progress can gain up to three of these. 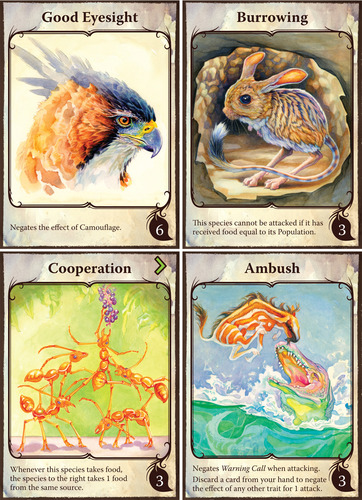 Players will have Species board in front of them that represents the different Species that they have under their guidance. Each one of these boards has two tracks: one which represents the size of the Population (the bigger the population, the more they feed) and the second track which represent how big each member of the population is (the bigger the Species, the harder they are to eat). The value of these two tracks can change depending on the player’s actions. 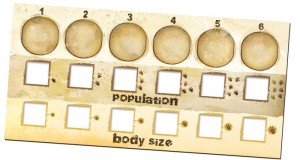 On their turn, the player will perform different actions using their cards. These actions are:

The player can do any of these actions as many times as they want, up to the limit of cards they have. The player can also opt to keep as many cards as they want for their next turn. Once the player is done playing cards, the next player take their turn, until everyone has had a chance to play the cards they wanted to play. Once all players have had a chance to play their cards, the traits they played are revealed simultaneously. Once this is done, the cards that were discarded onto the Watering Hole are revealed and added together. That amount of food cubes are then placed on the Watering Hole tile, added to any remaining food cubes that might be left over from previous turns. Any Traits that have effect when the food cards are tallied (such as Fertile (+1 Population), Long Neck (2 food cubes), etc.) are triggered at this time. Once all the effects are triggered, it’s feeding time. Starting with the player who has the Start player token, each player:

A Species may only eat as much as its Population, A Species must always eat if it can, either by taking a Food cube from the Watering Hole or attacking another Species if it is a Carnivore. Once all the Species have either ate their fill or can no longer feed, the turn is over. The Population of each Species is reduced to the amount of Food cubes that it has, with a Species that hasn’t eaten going extinct (return the tokens and the Species board to the middle of the table and draw a number of cards equal to the amount of Traits the Species had). Each player removes all the food cubes that they have on their respective Species and places them in the Food Bags. Pass the Start player token to the next clockwise player and you’re ready to have another turn. The game ends when the deck runs out. If all the player didn’t get enough cards, shuffle the deck and deal out the missing cards. Play out the last turn and count each player’s victory points (vp). Players earn 1 vp per food cube in their bags, per Traits on each of their Species, and per Population on each of their Species. Highest total wins.

What did I think of the game? Well, I like it, quite a bit actually. It also went over well with the groups I played with, with one group wanting to play again right away. I think that the key here is while it’s not the simplest game to grasp just from the explanations, once you start playing, all the pieces fall into place and you quickly can see the combinations of Traits and what they can give you. 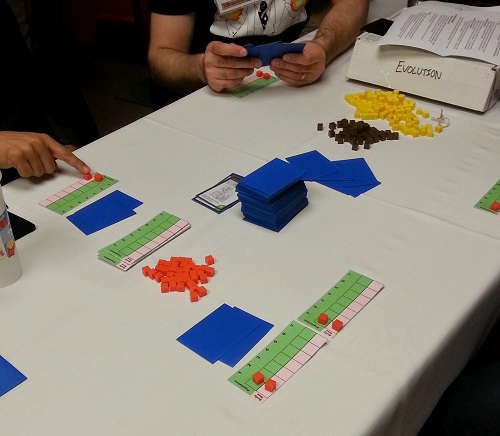 At the core, it is very simple since it’s all about what cards you have and which direction you want to take with them. While there is a certain amount of luck involved (it is a card game after all), you do have the choice of sacrificing cards to increase either your population, size or simply get more species and to me, that’s the main hook of the game. Yes, it is confrontational and it is an engine building game, but it is mainly a mini-puzzle each turn, deciding what you will do with the new cards you’ve just received. These decisions (play for trait, gain a new species or increase size/population) aren’t that simple. More species means more cards next turn (if they survive, that is), bigger size means that you harder to eat but at the same time, feed more whomever manages to eat you. Increase in size also means, if you’re a carnivore, that there are more species you can (probably) eat. More population means more vps, because you’ll eat more food but you’ll also score extra points at the end of the game.

And then there’s the traits themselves: most are useful, some are deadly in combination. The distribution of the cards is quite interesting: with 117 cards and 18 different traits, this means that there are on average 6.5 cards of each traits. However, if you take the time to count the cards, you see that the deck is skewed for player interaction: there are 15 Carnivore cards, which means that they are 3 times as likely to show up in any given round. Which means there will be plenty of Carnivores out there, trying to eat the herbivores, which quickly escalates in either a Trait or Size battle, which is where the fun of the game is. 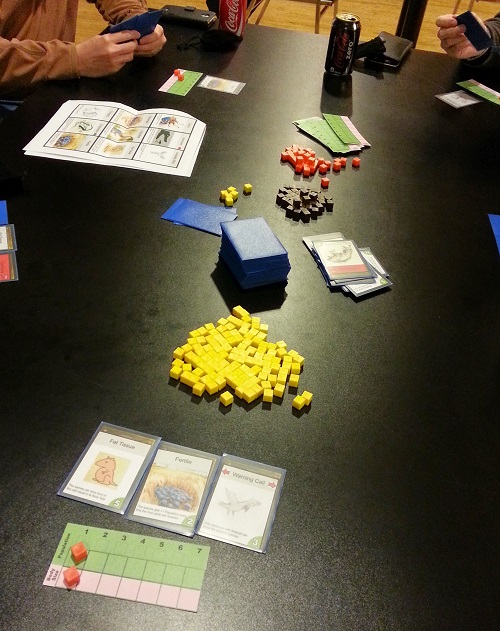 With a group that wants to play and is not looking for the perfect combo on any given turn, you can easily knock out a game of Evolution in about 30 minutes, even for a group of 5 players. The more the players take their time figuring out what to do with their cards, the longer the game, but even there, it should never be more than 1 hour, even with 5 players, which is still pretty good. Of course, this can be affected if there is a lot of negotiation during the feeding round, as people plead with the Carnivores… This could easily turn into the perfect small end of evening game or even start of the gaming session that you play until the rest of the group shows up. With plenty of player interaction and surprising combinations, it’s really a lot of fun. Wondering how long it will take for Trait expansion packs to show up… What are you waiting for, back it already on Kickstarter!