In this instalment of The Mechanics I’d like to take a closer look at one of my favorite mechanic of the last few years, namely that of Worker Placement. I have to admit that I thought that the idea of worker placement was older than it is. I was sure I had played something that used it when I first got back into board games but looking into it on Boardgamegeek, it seems that the idea came up about 10 years ago. As with anything geek related, there are debates as to what is the first worker placement game was and even to a certain degree what is a worker placement game.

I do believe that in a certain way worker placement games find their roots in RTS (real time strategy games such as Starcraft, Dune 2000 and Command and Conquer) with the idea of creating workers for specific tasks and assigning them to specific buildings in order to use the building’s power. This core idea then found itself in Puerto Rico, with the idea that once a player acquired a building, they still had to assign workers to it in order to gain its special power. Of course, at its core, Puerto Rico is really a role selection game, which is not today’s topic. Maybe another time…

What are Worker Placement games? Well, let’s look into it.

At its basis, Worker Placement is simply action selection, where the pool of possible actions changes in some way after each player’s choice. Also, in order to be able to select an action, one of the player’s tokens, or workers, must be sent to that space, with the amount of workers dictating how many actions the player will be able to take in the turn. The most common way of doing so is simply to have each of the action being selectable only once, thus denying the action to the other players. For example, in Agricola (by Uwe Rosenberg, ZMan Games), once someone chooses the “Take 1 Grain” action, no one else can take this action again. There is no other cost for taking this action apart from being the only one to select it. Should anyone else select it before you do, you’ll have to wait until the next phase to get a chance at taking it. 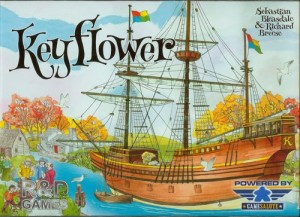 There are variations to this, for example by having several spaces available for a specific action, with each action having a different/more expensive costs or having some mechanic for pushing the previous occupant out of the space you want. For example, in KeyFlower (by Sebastian Bleasdale and Richard Breese, Game Salute – see review), several players can use the same action of a given space by simply paying one more of the already established cost, up to two more times. Or in Archon (by Nikolas Sakaloglou and Sotirios Tsantilas, Artipia Games), there are three spots for each action, but the cost is increasingly higher, although the players can have special workers who ignores the fact that the action has already been taken and thus use the action again for the cheaper cost. In Russian Railroads (by Helmut Ohley and Leonhard “Lonny” Orgler, ZMan Games – review), one of my favorites from last year, the cost simply increases, having the players spend more workers to do a similar action or a slightly better version of the action.

There are also other games which change the way the workers come back to the player. In most worker placement games, the workers come back once all players are done. In both Euphoria (by Jamey Stegmaier and Alan Stone, Stonemaier Games – review) and The Manhattan Project (by Brandon Tibbetts, Minion Games) the players decide when to take their workers back home (thus having a turn where they do nothing), with Euphoria doing Manhattan Project one better and having the players being able to bump workers off specific spaces, essentially allowing the player to delay the action of bringing them back home and introducing a good amount of deal making in the process.

Another recent example is Ground Floor (by David Short, Tasty Minstrel Games), in which the players do not directly place their workers but rather allocate time units to each task (each additional worker gives the player 3 time units). A very slight difference but this allows the player to be more granular with their actions.

Both Ground Floor and Dominant Species (by Chad Jensen, GMT Games) also add another wrinkle to the worker placement mechanic: set action resolution order. In most worker placement games, once a worker is placed, the player immediately takes the action dictated by the space. In both Ground Floor and Dominant Species, the action is delayed until all players have placed their workers and then the actions are resolved in a strict order. So both games add the pressure of making sure you’ve sequenced your actions correctly so as to not have wasted a worker on an action which comes too late. Lots of fun, but lots of potential for our friend Analysis Paralysis.

All these games have the same basic principle at their core: how to use the resources you have in order to gain better resources/get closer to your goal, be it working a farm or building an atomic bomb. They all force the players to come up with a long term plan and deal with the short term problems that the game and other players throw their way. While some games are much more tactical (Euphoria for example, allows the player to react to other players action by having very short resource-to-result chains), others are more strategic (I pity the player who doesn’t have a long term plan in Agricola), forcing the players to figure out exactly where he wants to go from the start of the game.

A worker placement game allows the players to be in competition with each other while still having their little sandbox. It is a great way to have player interaction without having direct confrontation since in most cases, the only thing the players are really competing about is the actions they want to select. Once they’ve got their actions, the others cannot further mess with their plans (of course, Manhattan Project allows the players to send spies in each other’s buildings, stealing other player’s actions in a sense, and that’s why it’s a great game).

The other side effect of the worker placement mechanic is that it reduces the decision space as the turn advance since all spaces are no longer available the further the turn advances. This forces the players to come up with alternative plans since the odds of being able to do everything you had planned decreases and becomes more and more unlikely. It takes the standard action selection mechanic, where the player has several possible action that he can take (such as in Quantum or Tikal) and makes it a competition since you’ll need to be able to time when you take the action not only based on your immediate need but what the other players are likely to choose.

From paper bits to digital bits

The obvious way to use this idea in a video game would be to make the buildings players fight over in FPS/Action games/RTS give the player who takes them over a direct benefit that is only available to them. This is the most straightforward use of the idea and is already in use in one form in games such as multiplayer versions of Call of Duty and the like.

A similar idea could be used to bring about some competitive edge in a multiplayer coop game, where the players, in turn order, get to select skills that they alone would have access to. In a certain way, this is already the case with weapons and equipment in general, but in a game where you would re-do your skill load-out in between rounds, it could be an interesting twist.

The key to using this system doesn’t necessarily lie in a simple translation, but rather the core principle: as a player, I am the only one who can use X since I’ve assigned one of my limited resources to it. This kind of “special power” can be anything really, and so can the limited resources. In very simple terms, in an action game, resources will most often be what the player can carry or equip, be it weapons or skill slots. Of course, if the game is one of global conquest, then the resource can be quite different.

Oh, and if what you’ve read here piqued your interest and want to try your hand at designing a worker placement game or just want to see how others go about it, there’s a great series running right now over at the League of Gamemakers website. Check it out!