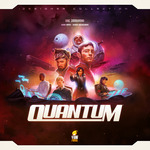 Quantum (Funforge) by Eric Zimmerman is a space conquest game where 2 to 4 players are trying to expand their empires by Constructing Quantum Cubes on planets or destroying their enemies, which will eventually allow them to put Quantum Cubes on plantets, This is done by using dice as spaceships, with each die face representing a different type of ships. The first player who manages to place all of their Quantum Cubes wins.

Quantum uses square tiles to make the map, allowing the players to reconfigure the map as they wish to change their experience, making the game more about expansion or more about combat, depending on the size and configuration. The focus of the game is more on attack and mixing it up with the other players than the classic turtling of 4X games. 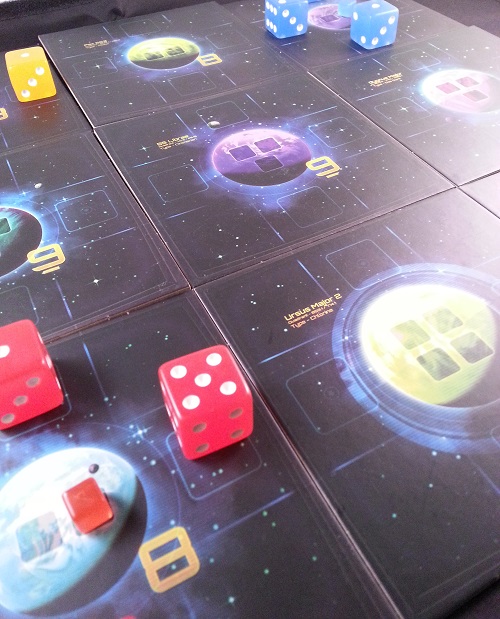 A game can be played in roughly 45 minutes to 1h30, depending on the size of the map and the experience of the players.

There’s a lot of stuff in this box: 4 player boards, a lot of map tiles, 4 sets of 7 dice (one per player), Quantum Cubes in the same player colors, two decks of Advance cards (Gambits and Command) and a pair of combat dice. There is also a rulebook and a 1 page set up card with various set ups for 2 to 4 players. 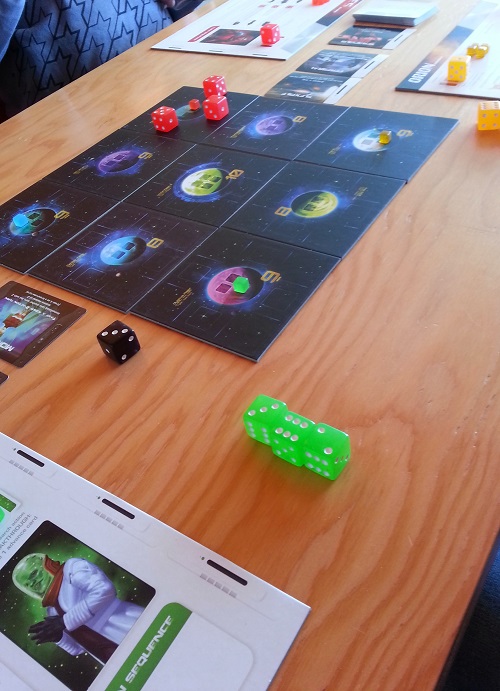 Quantum – setting up for a 4 player game

This is a gorgeous game, from the packaging to the playing pieces and the manual. The choice of bright, semi-transparent dice for the ships contrast very nicely with the space tiles and all the artwork for the cards is very evocative. Beautiful components are not essential for a good game, but let’s not kind ourselves, they do help. It is definitively easier to bring this game to the table than Steam, for example. I love Steam, but it’s not a gorgeous game.

The rulebook is adequate, with a nice FAQ section at the end. Overall, all the questions you might have about the game are answered within the rules and the player mats double as player aid. Some of the language on the mats however is slightly misleading and you’ll need to refer back to the rules to clarify them. The good thing is that the game is simple enough that it won’t matter after your first game.

Set up is fairly straightforward: the players select a map and build it using the map tiles. Each player then takes all the dice of a single color, along with 5 Quantum Cubes. Place one die on the Research space and one die on the Dominance space, both showing their 1 face. Each player then rolls 3 of their leftover dice, these will be their starting spaceships. The lowest total will also determine the starting player, who will pick their starting planet and place their ships around it, proceeding clockwise. The remaining 2 dice are placed aside for now. They are ships that can be build later, using Advance cards. Shuffle the Gambit deck and lay down three cards. Do the same with the Command cards. You’re ready to go. 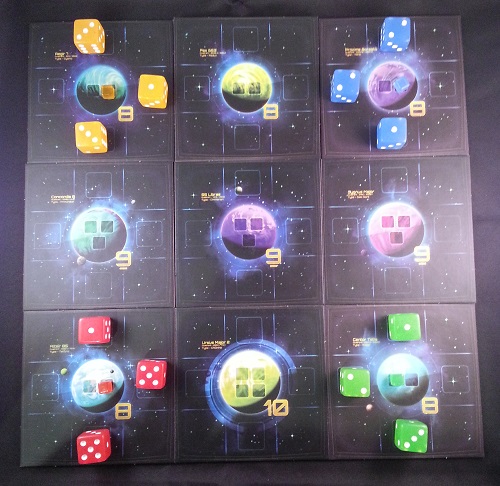 The core concept of Quantum is the die as a spaceship. The top face of the dice represents 3 aspects: the movement points the ship possesses (a 6 ship moves 6 spaces, a 1 ship 1), the strength in combat (the lower the better, with 1 being the strongest die and 6 the weakest) and what special ability the die possesses:

These special actions do not use an action, except for 2 and 5 since they are part of a movement action.

The game map is made of a series of tiles, each of which is made up of 3 elements:

On their turn, a player can take up to 3 actions before resolving the end of their turn, after which play passes to the next clockwise player. A player can select any of the actions multiple times, as long as they have actions left. The actions are:

A ship can only move/attack or use its special ability once per turn. 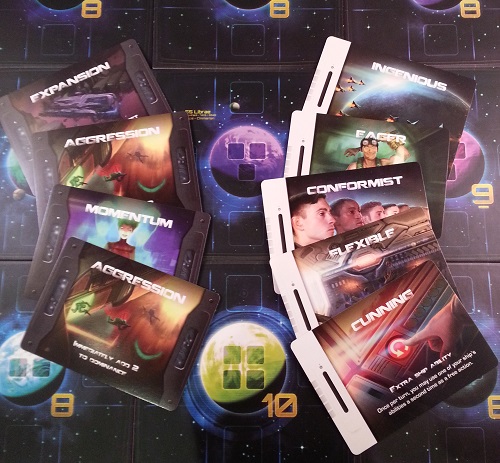 The first player who manages to place all of their Quantum Cubes wins the game.

When you need your fix for a 4X game (or any kind of exploration/combat game, really), this is perhaps one of the best game you can turn to. Even if you play with a group that has never played it before, it can be explained in about 5 minutes, with everyone understanding the flow of the game within a turn or two. What’s more, even if it is simple, people will come to discover the subtle intricacies fairly quickly, understanding how one can use movement to block, how you can easily move a fast Interceptor in and swap it quickly for a Destroyer and thus keep a stronger front line.

The other really good part is that, in general, a game can easily be brought to a satisfying conclusion in an hour, hour and a half maximum, with very little player downtime. This is a good thing, especially considering that games like Twilight Imperium take about 1h30 per player. And the speed at which you can finish a game only means that you can reset the board quickly and try a different map configuration.

The sheer amount of dice in Quantum give the wrong impression that randomness/luck plays a huge part in the game. This notion is quickly dispelled once you start to see how the different ships can manoeuvre and how you can put down Quantum Cubes on the map. Once this basic realization sets in, the game becomes one of strategic positioning, attempting to quickly sneak in and Construct. Of course, since the Construct action actually costs the player 2 of their 3 actions, the timing of this is critical and this is were the Interceptors come in.

Can’t move your ships into position long enough to Construct? Maybe using Dominance is more your speed. This is a game that greatly favors attacks over defense (no penalty for losing a battle you started, attacker always winning ties, get enough win and place a Quantum Cube). This means that in most games (at least with beginners), the game starts with exploring/Constructing and quickly turns into a giant slug-fest, as the players attempt to gain enough Dominance and making sure that anyone who is close to getting 6 Dominance points loses a few of them before their next turn. I’m still not sure how I really feel about this, as I worry that it will become the dominating strategy, but changing the map up might break this way of thinking.

The different Advance cards add a very nice, simple way of adding technology to the game, While they may be little unbalanced, they are up on display and force the players to jockey for Quantum Cube placement in order to snag up the best cards.

This is a game that is ripe for expansion, with the simple 5-6 player expansion at first (shouldn’t change the balance of the game too much if the map is big enough), with more Advance cards being the next logical expansion. I can easily see a series of different player mats with new and different ships. You see the hand of a video game designer in the dna of this game, as there are many levers that available to modify the game without changing the fundamental feel of it.

Is this game worth getting? Certainly! Easy to teach and great fun almost right away, this has all the makings of a classic space game.