Ah, small, micro games how you got my heart and what looks like the heart of half of the boardgame designers community. Not a week goes by without a new micro game being announced or showing up on Kickstarter, with Tiny Epic Kingdom, Burgoo, Where are Thou, Romeo? and Coin Age (just to name a few) leading the way. And you know what? I’ll always at least check it out. Why not? For under $10 (yeah, shipping is always expensive to Canada), you can hopefully get something that’s at least fun for an hour or two. 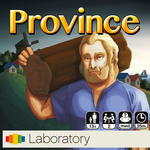 It is now Laboratory‘s turn to joins the fray (actually, it’s their second time as their first was a 1-card “CCG” called Shift, which I am unfamiliar with) with a micro resource management/rondel game, Province. How good can it be, with its small board, handful of tokens and very short playing time? Sure, the artwork is reminiscent of the more popular resource management games out there, but it looks so… simple. Simple? Yeah, it is. Easy to learn? Yeah, you can say that. Easy to win? Sure, I’ll show you how easy it is to… lose. Let’s check it out.

Province (Laboratory) by Samuel Strick (KS link) is a two-player micro game of resource management. The players compete to build structures that will give them a slight edge in the form of bonus powers and score them points. In addition, the players also compete to be the first to complete a set of 5 goals, which come out randomly.

The core of the game is a rondel, on which the common workers go from space to space, generating either Labor or Money. You always have the choice to move all the workers, but be careful as your opponents shares (most) of the same workers!

The game (will) come on a half sheet of chipboard, with all components cut out and ready to be punched out. They include a small game board, a number of coins in 1, 5 and 10 denomination, a Lender coin, 7 structures per player, 2 Harbor coins, 3 green meeple, 1 yellow and 1 orange meeple and three double-sided red/blue meeple. 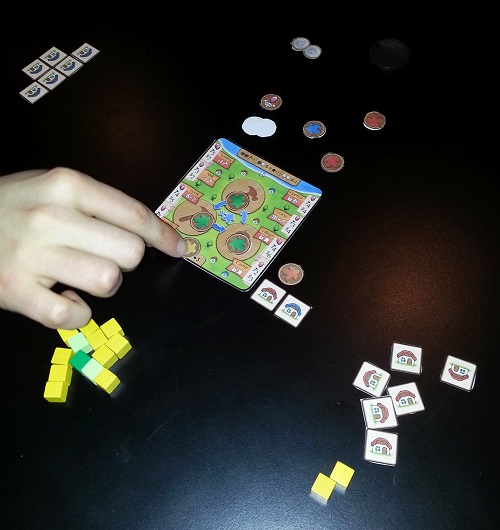 Obviously, this being a print-and-play of a game that is on Kickstarter and that will not be officially out for a few months, the components are obviously not final. However, a few comments: while the art is cute and clear, the art for the houses can be a little unclear as only the roof of the structureis color coded to the player. The board, while small, is quite clear and the effort to have every component fit on a single half-sheet of cork board is commendable. I would however, switch the worker tokens with meeples the first chance I get (I’ve actually backed the Meeple Source campaign, partially so I would get the Province Add-on) and probably switch out the structure tokens with little wooden houses. Both these upgrades are quite cheap but will reduce the fiddliness of the games and will probably not detract from the portability of the game.

Quick comment about the rules: while I do understand that they are not final, do note that some of the rules seem to be missing from the 2 page rules and are either in the video (how many coins the players start with) or simply have to be assumed (money is kept at then end of the turn, labor isn’t). Again, these are little nitpicks and I’m sure they will be clarified by the time the game comes out.

Set up is quite simple: give the players their 7 House pieces, place the three green meeple pieces on the 2 Labor and 1 Money spaces on the track. Take the 5 Bonus victory point pieces, shuffle them face down and stack them. Determine who will be the first player and give that player 2 gold pieces, with the other player getting 3 gold pieces. Set aside the Ship coins, the yellow and the orange meeple as well as the sailor meeples. You’re all ready to go.

A player’s turn is broken down into two phases: generating goods and spending goods. 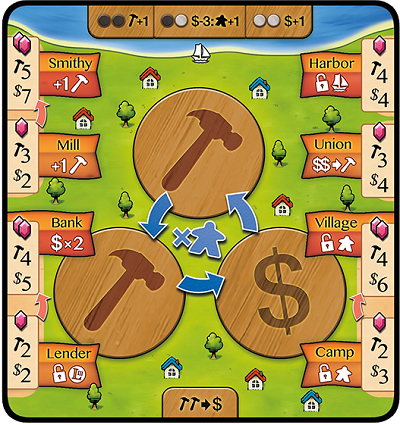 Province: The board, almost real-size

To generate resources (either coins or labor), the player simply moves the meeples from one area of the rondel to another one. Each meeple can only move once and it only generates a good of the type they land on. Note that the players do not have to move all the meeples, but need to move at least one.

Once the player has gained Labour and Money, they can spend them on structures, each of which will grant the player an advantage (either free labor at the start of the turn, double money when landing on the Money space, extra meeples or access to the Harbor or the Lender). The player can also “grind”, that is turn 2 Labors into 1 Money. Only if the player has the Union structure can they do the reverse.

The Harbor gives a random advantage to the player who has build it: throw the two Harbor coins and how they land indicate whether the player gains extra Labor, Money or allows the purchase of a Sailor for 3 coins. The Lender is odd: it allows the player to use a structure they don’t have. To do this, they must be able to take the Lender coin, either from their opponent or from the bank. Once they have the Lender coin, they can get rid of it for 3 coins or else lose 2 VP at the end of the game. In all the games I’ve played, I haven’t seen it used once.

Note that some structures must be purchased in order, indicated by arrows between the structures. Once purchased, the player places one of their structure tokens next to the side of the structure they purchased. If they are the first one to purchase that structure, it should touch the board, to indicate that they will gain the VP (the diamond shapes) at the end of the game.

The game ends in one of three ways: either a player has built all 7 of his strutures, all the structure types have been built by either players or, more likely, all the bonus tiles are gone. A game lasts anywhere between 15 and 20 minutes, depending on the players.

Once the game ends, the players total their points for their goals, any points for the structures they were the first to build and with an additional 1 VP per 5 coins they still have. The highest VP total wins.

This is an impressive little package: a short, simple resource management that can be explained quickly, played fairly quickly and does offer more depth that would appear at first. And all this in a small piece of punch out cardboard.

At first, you might be tempted to simply move all the meeples to the next space over. This might work for a little bit, getting you a few structures, but then, your opponent will figure out a few things: they will not move all the meeples. And you won’t get exactly what you need the next turn. And you will lose. Not badly, since the scores don’t run all that high in the game (max amount of points: 16 for both bonus tiles and structures, plus maybe 2 points for money at the end of the game). But you will lose. And lose until you figure out that you need to out think your opponent, figure out what they might want to do next turn and the turn after. You need to maybe sit on your money for a while, but until you get the Union structure, money will only get you so far. You need that extra Labor to get somewhere, so you’ll need to build the Mill and maybe the Smithy, even if that’s one of the most expensive structure. Or do you want to get the Lender? What to do, what to do… 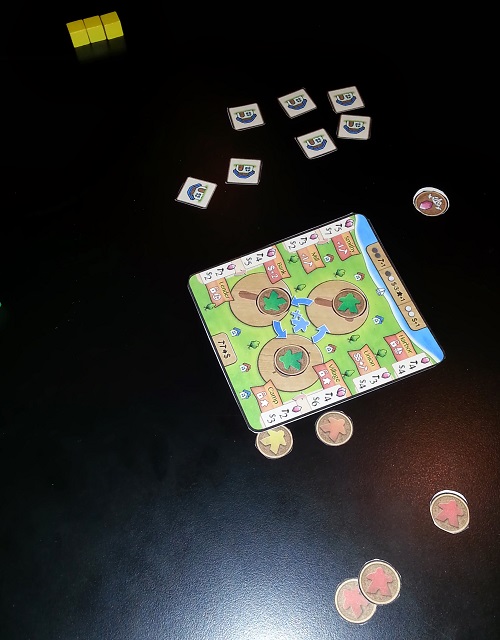 Province: …and 15 minutes later, it was all over

As you can see, while the game will go through a similar opening pattern every game, it’s what the players do afterwards as they attempt to out guess each other that make the game interesting. And, even if you lose, you’ll probably only have spent about 20 to 25 minutes, which will leave you plenty of time to play another game. And maybe another one after that as you try to put to use the lessons you’ve learned.

This game does have a little bit of the Agricola: All Creatures Big and Small vibe, but I think I like this better as there doesn’t seem to be a clear cut winning strategy. And it’s a hell of a lot cheaper, at $5.00 (plus shipping).

I’m very curious to see if Laboratory will do what I feel is the obvious, namely come up with different boards to vary the experience. There’s a lot of room to play with this clever system and I for one am curious to see where it can be taken.

Check it out, it’s well worth it, but hurry up since the campaign is almost over.