I haven’t done one of these posts in quite some time as I am trying to reduce the amount of projects that I back on Kickstarter. I’ve slowed down somewhat, but I am not that particularly successful as I’m still backing quite a few projects. One of the aspects that help me with this is the shipping cost to Canada, which through no fault of the people creating Kickstarters, is becoming outrageous. A lot of the time, while I might want to help out and back a project, the cost of shipping is so high that I end up waiting for the project to successfully fund, hoping to be able to buy it from a local retailer once it comes out.

This bring out a dilemma: do you back it, giving the creators money directly and maybe getting some exclusives at the same time or do you wait for it to come out, maybe check out the early reviews and pay less from an online retailer? For me, it’s always a question of just who is putting out the game in the first place. If it’s a larger company or someone who I’m pretty sure will actually put out the project, I’ll wait and pay less. If it’s something that looks really neat or a project from a first timer, I’ll back it a lot of the time, simply to help out. Let’s check out the latest batch of projects that I’ve backed.

Tiny Epic Kingdom (Gamelyn Games) by Scott Almes (KS link, even if the campaign is over) – I backed this project almost right away, mostly because there was already a lot of talk about Tiny Epic Kingdom even before the KS started. The game had been available as print-and-play for a while and had a solid reputation as a small, quick 4X game. The fact that the campaign just blew up, with more and more stuff being added to the box was just a cherry on the cake. Can’t wait to get my copy. 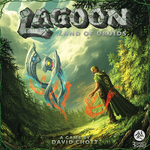 Lagoon: Land of Druids (3 Hares Games) by David Chott (KS link) – Oh Lagoon, you almost had me right away with your beautiful art, your intriguing premise and, more than anything, your print-and-play. A fun, simple to explain yet hard to master game of chaining hex effect in order to gain control over a mystical land that you explore one hex at a time. A very fun game and a big part of my backing this campaign was the print-and-play, which was easy enough to put together and proved how fun this game is. It does take a lot of confidence on the part of the publisher to put the print-and-play on the KS page, but it allows them to potentially make converts and make sure that their game funds. Well worth your time to both check out the campaign and print out the game. You won’t regret it. I should be doing a review in the coming days.

Timewatch (Pelgrane Press) by Kevin Kulp (KS link) – Time travel rpg using the Gumshoe system? Yes please! As with Hillfolks, this rpg Kickstarter is getting lots of interesting extras added on as the campaign goes on. The book is getting bigger and bigger, with new campaign seeds and interesting tidbits. My only regret? Again, shipping. I’m only backing this campaign at the PDF level, as shipping is bonkers to Canada. $30 for a book? Even as a thick book, it’s too much for me. Too bad. I’d rather have a book than a PDF, but at this price, I’ll go for the simple/cheap option.

Storyscape (Slabtown games) (KS link): a tablet based rpg system that allows the GM to rely on the App to help with running a session? A new rpg system designed by Robin D. Law? That sounds awesome! The use of an App would allow the system to be more complex or track more info without bogging down the session and allowing the player and gm to focus on what’s important: the game. Unfortunately, at this time, the campaign doesn’t appear like it will be successful, as there are only 5 days left and the funding is not even at 50% of what is needed. Here’s hoping they will find another way to get funding or re-try with another KS in a few months.

Scoville (Tasty Minstrel Games) by Ed Marriott: I really like what Tasty Minstrel  has been putting out in the last little while and I love the fact that they are doing both micro games and more “regular” size games and this is one such game. Scoville has been talked about for quite some time now and I was very curious about it. Those who have had a chance to play this have liked it very much, but it hasn’t quite caught fire (!) yet on KS, having finally funded just today. I’m glad that it has and I really hope it reaches the 80k funding goal (pepper-shaped pieces along with a board that has little holes so the pieces don’t go flying around) although I’m not sure it will. They also have a print-and-play on the KS page for those who wish to try out the game before backing it, although you’ll need a lot of cubes of different colors.

Draco Magi (Robert Burke Games) by Robert Burke and Richard Launius  (KS link) – Richard Launius is perhaps more famous for creating Arkham Horror than any other games he’s made and that’s perhaps a little unfair. While he has mostly designed “story’ heavy games, this one looks to be quite interesting with its mix of personal decks and beautiful dragon artwork. It’s also cheap enough to take a chance on, so here’s hoping it is as good as the videos and previews make it out to be.

How to Human (Right After Then Design) by Jordan W. Martin, Robert Noss and Derek Parsons (KS link): One of several micro-games I’ve backed over the last little while. What can I say, I can’t resist backing small games, even if they come from relatively unknown designers. The idea sounds intriguing (you are an alien, trying to pretend that you are a human being) and the asking price is low enough that I don’t mind taking a chance. Who knows, this might become a go-to game to start the day of gaming. 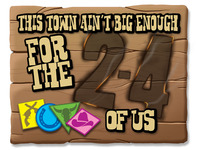 This Town Ain’t Big Enough for the 2-4 of Us! (Tasty Minstrel Games) by Jay Cormier and Sen-Foong Lim (KS link): Micro game? check. Cheap? check. Tasty Minstrel? Hell yeah, check! A nice little tile laying game for 2 to 4 player that looks like can be played in less than 20 minutes. This looks like it could be the perfect filler and the perfect gateway game, all rolled up into one. And even better, in order to get more buzz about the game, they put out a print-and-play a short time before putting the game up on KS. With a low piece count, it’s easy enough to print out and try.

Well, that’s it for me for now. There are however a few more KS that I’m keeping an eye on and am sorely tempted to back (most notably: Eons Cosmic Expansion; Village in a Box; Eternal Dynasty; Kingdom, the Angelic War; Los Cthulhuchadores; Mob Town; Oddball Aeronauts; and Project Dark). I haven’t made up my mind with those, as I’m either not sure just how good/original/fresh those games are or I need to do some more digging before I jump in. Who knows, I might just change my mind in the next few days…