Last December, I decided to embark on a great challenge: could I, proud member of the Cult of the New, play the same 10 games 10 times each in the space of a year? I had, in the last few years, fallen with with a bad crowd. With so many new games coming out all the time, with so many of them looking good or at very least interesting, I had taken the unfortunate habit of playing games only once or twice, and this even if they were great games. No more, I said. I’ll pick the 10 games that I thought would offer me the most, and attempt to play all of them at least 10 times in order to fully appreciate them.

So, after making my list, I set off in January to play those games. It’s been a month already and I’m proud to say that I’ve started on the right foot. I’ve played a total of 10 games last month. Yup, one month in and already 10% done.

So, what did I play? Turns out to be a lot actually:

18XX (once), or more specifically, 1862: Although the 18XX family seemed to be the biggest challenge out of all the games on the list, it might just end up being easier than I thought. My regular group of 18XX-heads are quite keen on playing 1 18XX game every month and more specifically, at least re-visiting most of the games we’ve played. It was the first time playing 1862 for us and we made a few mistakes (especially with the Freight Trains, which are tricky it turns out). We quite liked it and we found that it was actually one of the shortest 18XX we had played. We should be playing it again in February, so here’s hoping we get the rules right this time. 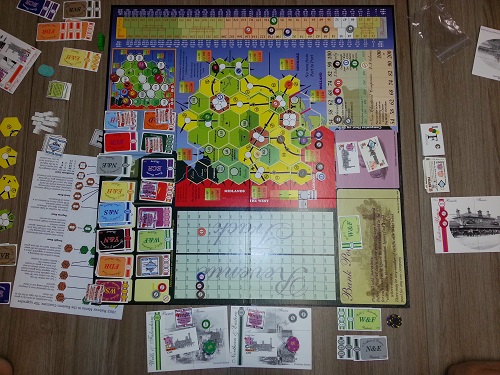 1862: Railway Mania in the Eastern Counties

Euphoria (once). Love this game the first time I played it and I love it even more now after 4 plays. Unfortunately, most of my plays pre-date the start of the challenge, but that’s ok. I’ve got a few people very interested in playing again, with a few more that want to try it out. I really like its blend of tactical worker placement with fun Recruit powers that kind of twist the game. 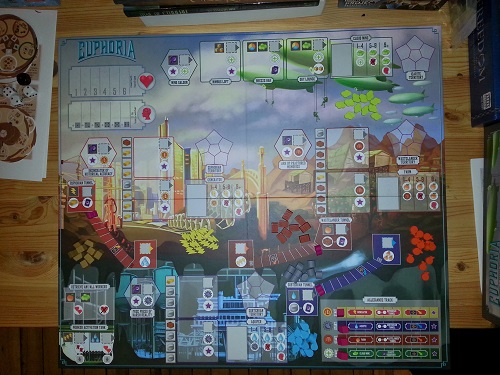 Euphoria – Yup, that one might just get played 20 times this year

Russian Railroads (twice): Look for a review of this superb multi-path worker placement game soon. I love this game and it will easily get played 10 times this year. Lots to do, some meaty decisions and a points engine that feels like a locomotive, with your end-of-turn points growing from turn to turn. Great stuff. 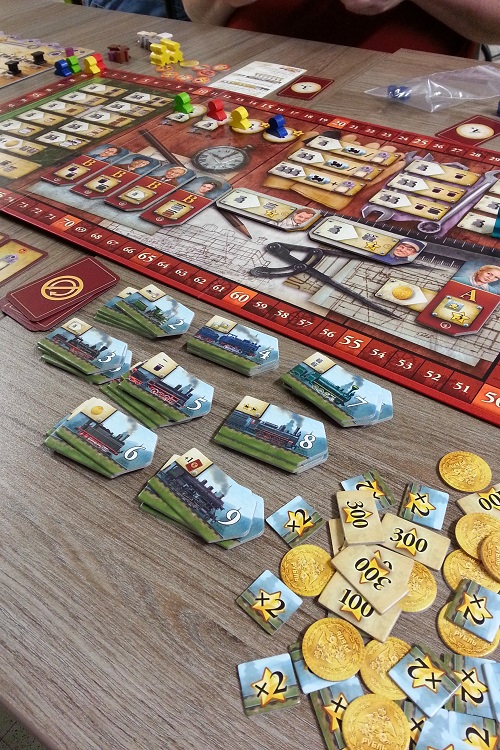 Russian Railroads: superb non-18XX train stuff, with no track laying (or is there…)

Android: Netrunner, (twice): Love this game when it first came out and playing it again in its new incarnation just confirms how great a design it was and still is. I’m really glad I’ve got a few regular opponents at work and that it can be played over lunch, although it can be a long game. Still have to learn to not be afraid to go on runs as the Runner, but hell, maybe I’ll get to play Corps soon too. 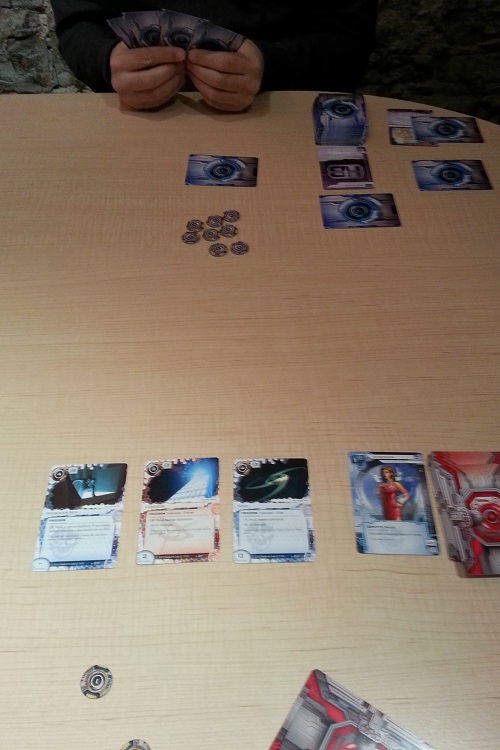 Android: Netrunner: not the most photogenic game, but it more than makes up with quality gameplay

The Duke (4 times): What can I say, The Duke is my current go-to short game. It plays fast, it’s easy to teach and I win most of my games, which is always a plus. It is a captivating design which I’m sure I’ll be playing for a long, long time. 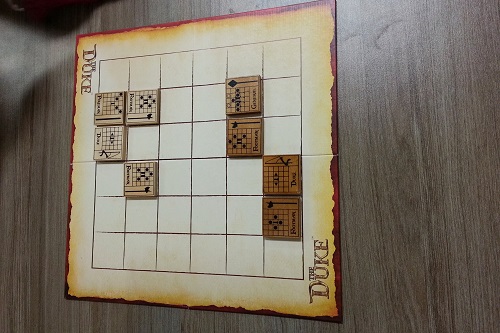 The Duke: another fool ready to be taken down…

All in all, I managed to get 10 games played, with half of them played at least once. Not bad, since I thought it would be a lot tougher to get the games to the table. Turns out other people also like playing the same game more than once or twice. Who knew!

A few things didn’t go as well as I planned. I would have liked to get a few games of B-29 Superfortress in, but I’m having a terrible time with the rules, finding the game too much of an exercise of rolling dice and seeing what happened. Very, very tempted to replace the game with RAF: The Battle of Britain 1940 instead, which (being a John H. Butterfield game) has way more decision points. Once I’m done reading the rules I’ll let you know what the decision is.

I’m surprised that I haven’t got Age of Steam/Steam and Hegemonic to the table yet, a problem that I’m pretty sure will be fixed very soon. Still unsure about Briefcase, but until Sail to India comes out…

I’ve also come up with Achievements for this challenge:

I kind of want to make the achievements into badges for the ‘Geek, but I’m not sure I’ve got the graphical chops for it. If anyone is up to helping me with this…

I’ve already got two games played in February (1876 and Russian Railroads), so I’m keeping up the pace. It really does look like I’ll be able to beat this challenge after all. Seeing as I managed to play 24 games in January, matching my highest total of 2013, I’m in good shape.