I don’t get to play short, abstract 2-player games often enough. Most of the time when I find myself with a single opponent, I either end up playing a heavy 2-player wargame, an LCG or a light dice game, but none offer the fast thrills of a good 2 player abstract. Game such as the Project GIPF games, with their very simple, clever mechanic come to mind: I’ve owned two of the games, YINSH and ZERTZ, for quite some time but they never hit the table enough for me. This makes me very hesitant when I see a new 2 player abstract: even if the game greatly appeals to me, will I actually get to play it?

I was quite curious when I started to hear a lot of good stuff about The Duke, right after Gencon. I had missed it completely when its Kickstarter campaign was happening but now the buzz was very strong. A deep, 2 player abstract that seem to be garnering lots of fans? Maybe I could find some people to play this after all. So when I had a chance to pick it up, I did and I’m really glad I did.

The Duke (Catalyst Game Labs) by Jeremy Holcomb and Stephen McLaughlin is a 2 player abstract game where the aim of the game is to capture the titular Duke. On their turn, the players can either move a unit or draw a new unit from their bag. The twist is that every unit is two-sided, with a different move pattern on each side and every time you use a unit, you flip it over.

The game components are somewhat plain but very functional. The board is a very plain 6 by 6 square quad-fold mounted board, but anything fancier would not be very useful. There are 25 game pieces per player, all of them wooden, which gives them a nice heft. The movement pattern is clearly printed on them, and while it might take a while to get used to what their movement is, it is not the fault of the pieces rather than just the barrage of info that you will have to absorb the first few games. 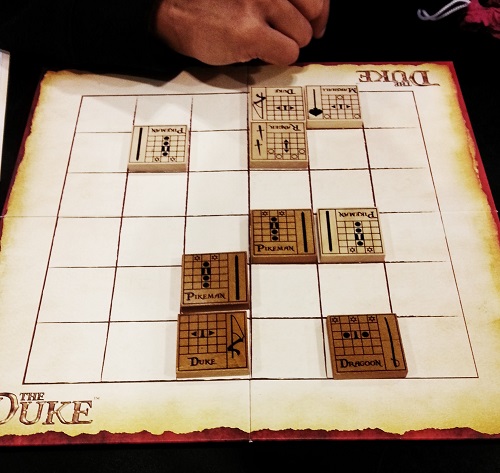 The Duke: Anshul’s first game. He liked it even if it didn’t end well…

Apart from the two bags that player will draw their pieces from and a few well done player aids, the game also comes with a very thorough game manual that actually goes into all the rules for the game, including rules for pieces that are not in the game but are rather upcoming expansions. I do like this as all the info is in one place instead of being on several small pieces of paper that you can lose easily and it gives you an idea of where the game will go in the future. The rules also include Expanded Play abilities, Alternate Objectives, a visual guide of all pieces that come in the base game and, something that I find very cool, info on how to create your own pieces. Did I mention that the game comes with two blank pieces (with just 5 by 5 grids printed on them) and a set of stickers corresponding to all the possible abilities? Yup, right out of the box you can make your own custom pieces or try out the new expansion pieces before purchasing them.

All in all, a nice package and well worth the money, even if I find the cover a little bland.

The rules of the game could not be more straightforward: both players start with 3 pieces, namely the Duke and two Pikemen. The first player places his Duke in one of the two middle squares on his end row, making sure that the name of the piece is facing him and that the correct side (the one with a pawn’s silhouette) is visible. He then places his two Pikemen next to the Duke, with one side completely touching the Duke. The second player does the same thing, but on his side of the board.

We are now ready to start the game. On his turn, a player can do one of two things: move a unit, flipping it to its other side after or pull a new unit at random from his bag. Note that he can only pull a new unit if he can place it next to his Duke, with one side touching.  Once that is done, it’s the other player’s turn. 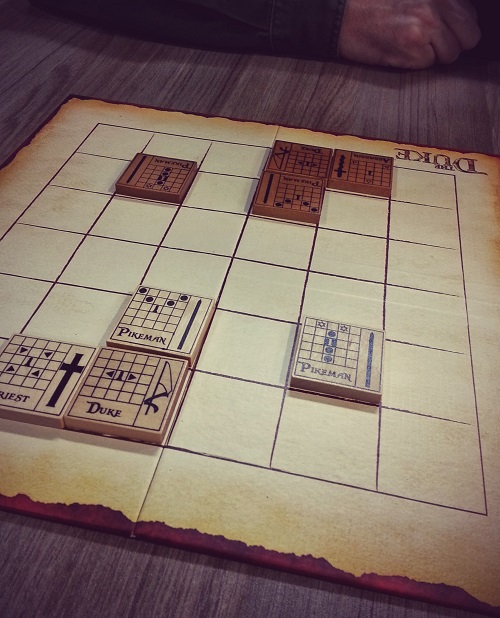 The Duke: a game in progress… someone will lose.

A unit can move anywhere that is indicated on its pattern and if it ends its turn on top of an enemy unit, it captures it. If there is a friendly unit in that square already, it cannot move there. The following symbols are used to show where/how the piece can act:

There are two more symbol (Dread and Defend), but they are not used in the base game.

If, by moving or flipping a unit, you can capture the enemy Duke on your next turn, you call “Guard”, letting your opponent know. He then has no choice but to move his unit. If he can’t. he loses the game. You can never place your Duke in a “Guard” situation.

And that’s it. Simple to teach, but oh so hard to fully grasp…

I really like this game. It’s simple enough that it can be explained in 5 minutes or less since it is very similar to Chess and Shogi yet has enough bite that it can surprise with the depth of the gameplay. The fact that the way the piece moves is printed directly on the piece helps greatly with knowing what a piece can do but the flipping mechanic, which changes the way the piece moves/act is what takes people time to understand. 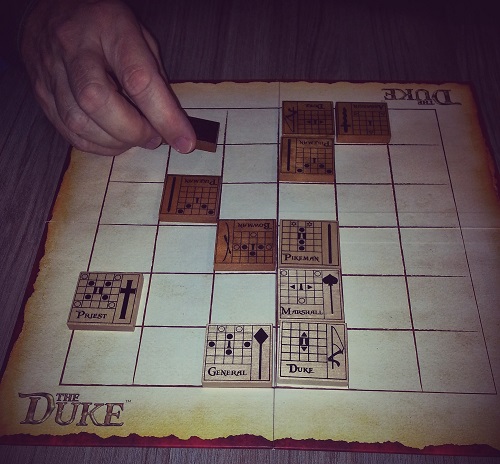 The Duke: Easy to learn… but oh so cruel…

Expect your first 3-4 games to last less than 10 minutes, as both players will probably make blunders that will cost them the game. After these first few games, you should see the time it takes to play a game increase steadily as both players will now get it and things should get tense. Expect a lot of “piece locking”, or the positioning of pieces in a way that moving would cause them to be captured. This has the side effect of make certain squares unavailable thus shrinking the board and if you are recklessly bringing pieces onto the board can be fatal, locking your Duke in place when the other player comes threatening. This is why you need to carefully consider where you bring in new units since the Duke is always limited to side-to-side or up-and-down movement. Bringing in a new unit that would close both movement sides can prove fatal to your Duke.

The apparently simple decision of moving a piece or bringing another piece on the board is actually quite tricky since space is so limited. Bringing too many pieces can cause major gridlocks but being able to bring pieces whenever you want/can means that losing a piece to capture isn’t as bad as it would be in another abstract strategy game. On the other hand, not knowing what piece will come on does bring an extra layer of tension as you’re hoping for just the right piece to come on.

There’s been complains about the cost of some of the extensions, and I for one am unsure where the complains come from: $10 for 7 or 8 new wooden pieces seems very much in line with what I would expect, and especially from a game where you’ll play more than once (we played 7 games the first time I brought this out).

I highly recommend The Duke if you are a fan of abstract strategy games, especially if you like short, slightly chaotic game and even if you’re not normally a fan of abstract, you should still try it out. You might just find the game that you didn’t know you’d like.