Ah, the lure of Kickstarter, the very idea of saying: “I do think that’s a good idea and I want to believe. Here, have some money and here’s hoping that you can deliver something that’s close to your vision!” or, to be more blunt “Aurg! Cool! Need now!”

There’s always that little line, isn’t there? When you see something that looks really good, that they people who are making it are so excited that it’s contagious and you just want it now. And then, when all said and done, you get to wait. A long time. Hoping that you don’t lose that excitement. Or lose your money that you’ve invested. Or even worse, that the game will not live up to your expectations. I think that’s the worse, really.

I backed three games in the last two weeks on Kickstarter. One of them, the one I’m the most curious about not being released, or at least planned to be released, until a year from now. Another one should be out in the Spring and the last one should be out in a month or so. Is it the complexity or simply a publisher that’s using Kickstarter as a marketing engine? Dunno, and frankly, don’t really care. I just want these games…

The first game I backed is Burning Suns (SunTzu Games) by Emil Larsen, a 4X space game. 4X stands for eXplore, eXtend, eXploit and eXterminate, or games where the players play an empire and, through exploration, expand their empire, get new technology and kill everyone who stands in their way. I’ve already have a few 4X games (Empire of the Void, Eclipse and Space Empire: 4X) and I am waiting for another one (Hegemonic), all this in the search for that perfect experience and no, I don’t have/want Twilight Imperium since I find it too long and with too steep a learning curve. What Burning Suns is bringing to the table, at least for me, is variety. All of the games I already own have variety built into the exploration bit, but Burning Suns brings variety to the races by breaking every race into three components: ideology, species and structure. What these three different segment do is dictate what the the Race can do and what advantages they have. Add to this a board that uses circular board pieces instead of hexes, making the set up even more flexible and a variable action board that changes the order of when actions take place and what you have is hopefully greater replay value and I for one cannot wait to see it in action. Only trouble, the game won’t be out for another year although a print-and-play playtest version is available. The Kickstater campaign is over but SunTzu is still taking orders. Can’t wait to try it out. 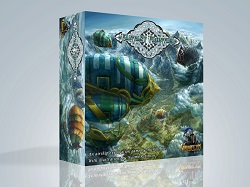 The second game I backed is Fantasy Frontier (Gamelyn Games) by Michael Coe. This game is interesting since it is a blend of exploration, tile placement, worker placement and pattern matching, but with flying airship that can fight each other! The game’s art is gorgeous and the game flow looks pretty interesting, with several path to victory as you move your ship around, lay down more tiles, explore the tiles to gain resources so you can lay down some settlement and score points. Create a pattern that matches the map card(s) you have and get some more points. Cause enough damage on your enemies and, yup, get some more points. The combat system seems simple enough and I do like how, instead of destroying the ship, you simply deny a specific action space to the other player until it is repaired. Simple, but effective. The game should be out in the spring and I’ll make sure to write a session report once I’ve played it. 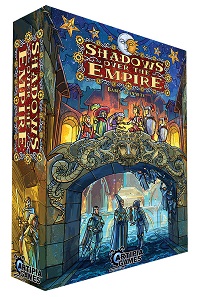 The last game I’ve backed and probably the first one I’ll get is Shadows over the Empire (Artipia Games) by Babis Giannios. Another beautiful game from Artipia and so far, they’ve had a good track record with Briefcase and Drum Roll and the upcoming Archon. This is  a card game where the cards are laid out in a grid and the players try either get all of their control token on the cards, but without anyone else’s token on them, or take control of the central card. The gameplay looks fairly straightforward (influence a card or use a card’s power where you have sole influence) and there is a clever way to ramp up the difficulty of the game by replacing some of the cards with sub-sets of more powerful cards. Should be getting this one in my hands very soon as they expect to be able to send out the copies in November.