Buying new games is always an interesting process. If you’re at all like me, there are several ways you end up buying a game: some are just pure impulse purchase, knowing nothing about the game but there is a little something that makes you grab it, usually a sentence or an image; sometimes, you read about the game and you stow that info deep inside the vault, thinking there might be something interesting in there; other times, the first time you hear about it you know you need to get it; and lastly, there is the type of game that somehow fits into a current project and you just want to see what others did within that space.

All this to say that I bought four new games in the last few weeks. These are not games I had pre-ordered or backed on Kickstarter, but rather games that either had lodged themselves in my brain because of something I had seen about them before or games that had a lot of talk about them once they came out.

Let’s start with Tenka (Victory Point Games) by Scott Muldoon. This is a 3 to 4 player card game that I’ve had in my sight for quite some time but somehow, never got around to order. Well, that all changed last weekend at Stack Academy when I noticed that Supernova Games (who was on site) was now carrying Victory Point Games. It’s a little more expensive than ordering direct, but no shipping, so it all comes out even in the end. The setting of the game is medieval Japan, but what caught my attention is the simplicity of the rules. On you turn, you draw a card and play a card. Each card has two possible uses: one if the card is put on the discard pile and one if the card is played on your playmat. Through these two actions, you will try and conquer provinces to achieve victory while stopping others from doing the same and trying to do so while the exact number of provinces needed changes, depending on how many times you’ve gone through the deck. While the rules are quite simple, the game appears quite deep, and victory is harder to achieve than the rules would have you believe. I’m really looking forward to this game hitting the table soon.

While I was at it, I also picked up Infection: Humanity’s Last Gasp (Victory Point Games) by John Gibson, a solo game that I also thought about ordering a little while ago. I like solo games and Victory Point Games has a few really good ones that I’ve enjoyed a lot in the past, such as Hero of Weehawken, In Magnificent Style,  We Must Tell the Emperor and Swing State 2012. The subject matter is interesting (a plague that is spreading in the USA and the efforts made to stop it, somewhat reminiscent of Pandemic) and it being solo, I can probably play 3-4 times in an evening. I just hope that unlike too many of the State of Siege series, it’s not based too much on dice rolls and instead has plenty of meaty decisions in the game. Looking forward to trying it out. 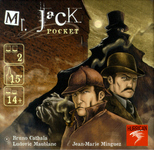 The last two games I purchased are both two-player games and are very different from each other. The first of the two is Mr Jack Pocket (Hurrican) by Bruno Cathala and Ludovic Maublanc. The game is another iteration of the Mr Jack line, this time as a small, portable game. I have to admit that I’ve fallen in love with this game based on the excellent Android version, which I must have played a dozen time since getting it two days ago(!). The game is fairly simple, being a game of cat-and-mouse, with the Sherlock Holmes player trying to deduce which of the 9 characters is Mr Jack and Mr Jack trying to get away. The action selection mechanic is simple and clever: there are 8 actions possible, each on one side of four different discs. These discs are flipped randomly at the started of the Sherlock Holmes player, who then selects one action, then the Jack player does two out of the three leftover actions, with the Sherlock Holmes player doing the last action. The discs are then flipped over, with the Jack player being the first to select actions and so on. Simple mechanic, but it forces the player to fully plan out their next few actions knowing what actions will be available when. Simple, but really cool and gripping. The Android version is quite hard even at the easier level, so there is some play in there. Should be interesting to play head-to-head.

The last purchase is another two-player game and one that got quite a lot of press at Gencon: The Duke (Catalyst Game Labs) by Jeremy Holcomb and Stephen McLaughlin. This is a straight-up strategy game in the tradition of chess, except that not all units start on the board and that every time a unit is moved, it is flipped over, changing how it can move. There is a certain amount of bluffing since your adversary cannot look at the flip side of the piece and hence doesn’t know what the capability of the piece will be. The production value of the game is very nice with thick wooden tiles that have all the information on the capability of the unit on it. There seems to be a lot of room to grow since a lot of expansions are planned/already came out if your were a Kickstarter backer. I missed it originally, but with all the buzz I couldn’t pass it again. Should be fun.