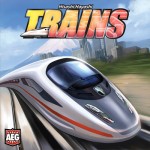 I had talked with Marc during the week and we had decided to break out Trains (Alderac Entertainment Group) by Ryo Nyamo after the Math Trade. Trains was one of the games I received in my post-Gen Con order and I was itching to play. I had heard about it after Essen two years ago and at that time it had piqued my interested, with its blend of deck-builder and track laying on a map.

At its core, Trains is a very simple deck-builder, very similar to Dominion: on your turn, you play action cards, buy new cards, discard any left over cards and draw back up to 5 cards. The two core actions you’ll be doing using your cards are laying new tracks (putting a cube on the map) or putting a new station in a city (putting a white cylinder on a city). Both actions will cause you to take one or several Waste cards that are, well, just waste. They take up space in your deck and do absolutely nothing. Doing these actions or buying cards cost money, which is gained from some of the cards you have in your hands. If you can’t do anything, neither buy nor actions, and you have some Waste cards in your hand, you can remove them from your deck instead of putting them in your discard.

The game comes with about 25 different sets of 10 cards, from which you’ll take a sub-set of 8 sets to play. There is another 8 card sets that you can also buy during the game and two maps, printed on a different side of the board. On the Geek’s page for Trains, there are a whole bunch of new maps, both official and fan-made, so there is plenty of replay value, and this even without new card sets. It will be interesting to see how the game progresses once card expansions start coming out. 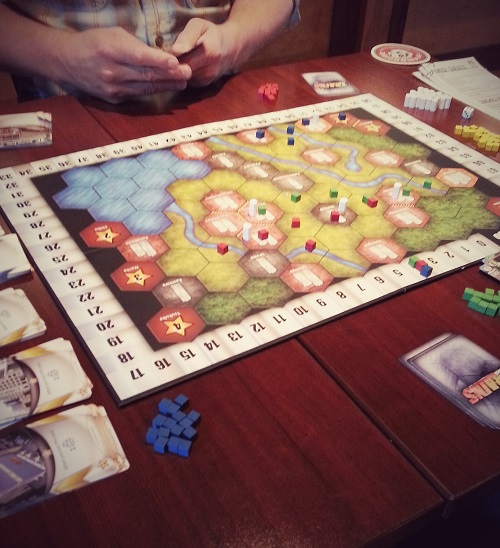 Trains: all quiet on the Tokyo front

The cards you can buy are either the same cards you have in your starting deck; cards that give you more money; victory points at the end of the game; allow track laying in specific places that won’t generate additional Waste; generate victory points every time you play them; cheaper track lay; etc. There are the typical deck manipulation cards and cards that allow you to get rid of waste for bonuses. In other words, many cards that we’ve seen many times from deck builders. Nothing really new there.

The real breath of fresh air, and what causes the focus of the game to truly go into adversarial play, is the play on the map. You see, there is nothing stopping you from laying a track in a hex where there is already another player. Well, nothing if you don’t mind grabbing more Waste and paying more money. So it becomes a game of where to lay your cubes and when, making sure that other players that come into your territory pay more for doing so. The map also includes features such as rivers and forest, both of which are more expensive to build into.

The game ends when 4 different sets are bought out (there are only 10 cards per set), when one player has laid all of his tracks or when there is no more stations. Count the points on the map (you get points for hexes with Stations in them and points from hexes with victory points printed in them) and any points you may have in your deck and you’re done. Games tend to last about 45 mins to 1 hour and you tend to play 2 or 3, or at least we did. 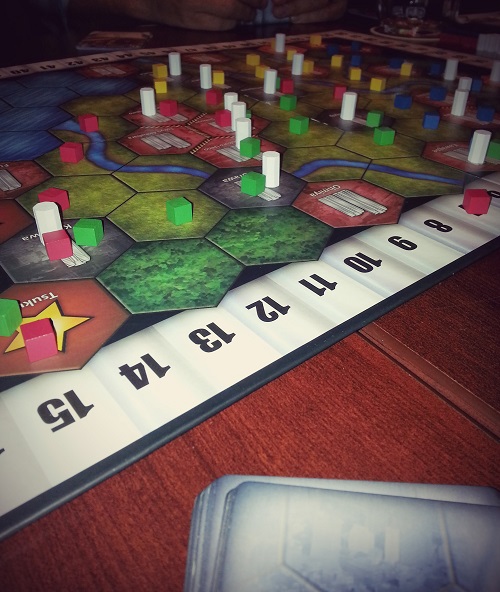 Trains: things are getting crowded.

The game is fairly straightforward, although we seemed to have had an issue of what the cost for various terrain feature was. I don’t think it’s a problem with the game, more of one of players having problem focusing. The rules are simple and as I was saying before, if you know Dominion, it is a cinch to pick up. The amount of different card sets and maps mean that there is a lot of replay value in this. Turns are hyper fast if you’re playing with people who are used to deck builder, with hardly any downtime at all.

The core decision making in the game center on where you will take your route and how to handle the endgame, as you can easily switch from track building and start buying the pure VP cards. They are fairly expensive for the vp they bring you, but they have the advantage of not bringing forward the end of the game as much as track laying and not producing extra Waste, but I’m still not completely sure if they are worth it. Also, since every time you build on the map you gain Waste, you have to accept that your deck will become less efficient, that is unless you have a “waste management” strategy. Some nice decisions there as well. 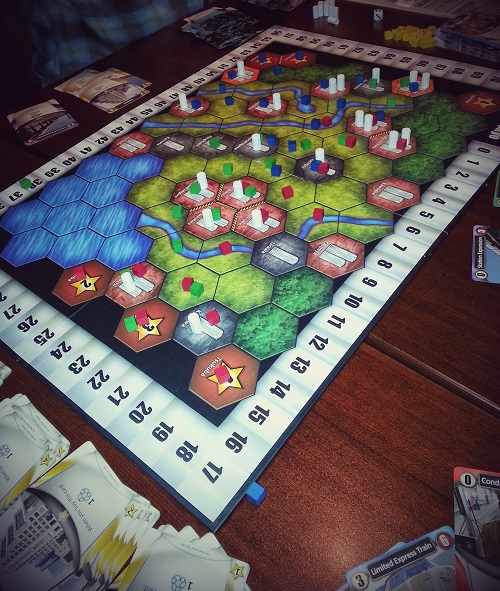 We ended up playing two games in total, with the first one being a three-hander and the other being a four player affairs. Mike actually won both, complaining during the first game that he had grabbed too much Waste when he was laying tracks but still managing to dominate the map. He also was the player that triggered the end game in both games, which leads me to suspect that there is an edge to be gained there. The games were close overall, with Mike never winning by more that 3-4 points. Lots of fun and I’ll make sure this hits the table a few more times. 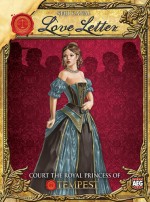 I only had about 45 mins before I needed to head out so we broke out one of my favorite micro-games of late, Love Letter (Alderac Entertainment Group) by Seiji Kanai. A micro-game is a game with simple rules, that has very few components (in this case: 16 cards and 12 cubes) and that can be played fairly quickly. I personally have an additional requirement: the game must have a certain depth to it. Sure, you can make a simple, small game, but can you make it deep? To me, that’s the real challenge. And boy does Love Letter fill that last requirement!

Set up is dead simple: put the tokens to the side. They are really victory points and using pen and paper would work equally well. Shuffle the 16 cards, give each player one card and remove one card. On his turn, a player draws one card and plays either cards. If he is the last player standing, he wins and takes a cube. If he isn’t and there are no more cards left, all players that are still in the game reveal their hand, with the highest number winning. If there are still cards to be drawn, play passes to the next player. Dead simple.

The core of the game is obviously “What card do I play?” The 16 cards are one of 8 different characters, each with their specific “power” or effect when played. From 1 to 8, they are: the Guards, who get to point at another player and attempt to guess what card they hold. If they are right, the other player is out of the round. The second, the Priest, gets to look at another player’s card. The Baron is next, and he allows the player to compare, secretly, his card with someone else’s. The lowest of the two is out of the round. Number 4, the Handmaid, protect the player until his next turn. The fifth, the Prince, forces a player to discard his hand. Number 6 is the King, who can trade hand with another player. The Countess is number 7 and must be discarded if your other card is the King or the Prince. Finally, at number 8 is the Princess who makes the player lose should he have to discard her.

So, with these simple cards and simple rules you get a tense game of guessing and trying to survive. Getting the Princess at the start can be dangerous since it means that you only get to play whatever card you draw and you can be eliminated by two cards: the Guard and the Prince. On the other hand, stick around until the end and you’ll win. Do you discard the Countess even if you don’t have the King or the Prince, making the other players draw a wrong conclusion? What about the Guard? Are you sure enough to try and knock someone else out?

I love this game: it plays fast, there are some hard decisions to make, it has a good element of bluffing, which always leads to laughing. Even better, it can be explained in seconds (just don’t forget two simple rules that are easy to get wrong: 1) discard one card without showing it before starting the round and 2) the Guard cannot call out another Guard) and since it’s such a small game, it can go anywhere. It’s always in my bag when I go out and I’m always willing to play.

Our game was a 4 players, which meant that the first player to 4 cubes would win. Jason took an early lead with 2 cubes to none for everyone else, but then was caught up first by Mike and then by Marc. At one point, everyone had 3 cubes except for me, since I had none. I sort of came back taking two hands in a row, but Marc ultimately won when Mike guessed successfully that I had the Princess (again). In the last 5 hands, I ended up with the Princess as my opening card all 5 times, which left me very little wiggle room. We saw some interesting play (swap your hand with the next player, forgetting that you were handing them the Guard and then getting knocked out) and, more importantly, had a good laugh. Love it and will play it at the drop of a hat.