Not the biggest gaming week last week, but I still managed to get three games in: a playtest session of Fire in the Lake, which I covered in my last Session Report (and hopefully will finish tonight) and a game of Leader 1 on Wednesday and some Skyline, on Saturday night.

At our weekly boardgame meetings at Ubisoft Mtl, I got to play a game of Leader 1 (many publishers, but Rio Grande published in North America), designed by Christophe Leclercq and Alain Olier. This was quite a departure for me because apart from playing Blood Bowl oh so many years ago and some games of World Cup Tournament Football (which is not really about Football, but rather a betting game of sorts), I have to admit that I do not play a lot of sports game. I love hockey and all, but I’ve never been really drawn to boardgame representations of sports game. Steph however is a big sports game fan, so I figured why not. We were joined by a new face, Benjamin. Hopefully we didn’t scare him too much… 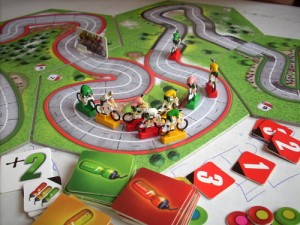 Leader 1 is interesting in that, while it could have taken the traditional road of having you control one or two racers and play cards/use dice to push your racers towards the finish line, it is more of a management game where the central decision is when to leave the peleton and race ahead, trying to be the first one to cross the finish line. Let me explain, roughly, how that works.

It all starts with the track, which is made of large hexagon, with a path that snakes from one side to the other. This track is itself broken down into two or three lanes (depending how narrow the road is), each lane further broken down into several spaces. This is where the peleton (which I will talk about later) and the racers (when they are not in the peleton) will be. The players will notice two things about the giant hexes: one, the colored lines that are on each side of the track; and two, the mile stone which stands on one corner. The colored line indicate the type of terrain the track is on, namely whether it is on flat terrain, a low hill, a steep hill or downhill. This will make a difference to your racers, as they will all spend a different amount of energy on flat terrain or hills, while they will all spent the same amount of energy in downhill or low hill. The mile stone is used to determine how much energy each of your racers will have for the race. Simply add all of the values on the hexes you are using for the race and you’re set. The game comes with a few suggestions for the track but after a game or two, you should know enough about the system to create your own tracks.

Each player receives a set of three racers, each with a different colored base: a leader with a yellow base, a climber with a red base and finally a rouleur with a green base. As stated above, the different colored bases indicate the strength of each of your team member: the climber excels at going up steep hills  but is not very good at flat terrain; the rouleur excels at flat, but is bad at steep hill; the leader is average at both. This simply translate to how many “free” spaces they can move without spending any energy when they start in a hex of that type of terrain. Once the free spaces have been used up, every other additional space will cost an increasing amount of energy (1 for 1 energy; 2 for 3 energy; ect). In addition, the player can state whether the racer will be specialized in sprinting (only when he is in the last tile) or going downhill, netting that racer an additional free space when he is in one of those situation. This is an important decision if you are racing a Tour, but it is usually pretty simple when playing a single leg.

So far, elegant but fairly standard: you have energy which you spend to move additional spaces. What makes the game really interesting to me is the concept of the peleton, or the main group of racers in a bike race. In Leader 1, this act as a sort of wall that is continuously chasing the player except that… it’s not always a bad thing. At the start of the race, all the racers will be in the peleton, an entity that takes 2 consecutive spaces in length and the width of the track. Movement for this mass is rolled by the “peleton master”, a title that changes hand at the end of every turn. Once any racers that have broken out have decided how many spaces/whether or not they will spend more energy and that any racers still in the peleton have decided whether or not to break out, the peleton master decides whether or not the peleton will push. This simply results in a bonus of +1 to the 12 sided dice that he will then roll. The dice is not a real 12 siders, but instead has stickers on each face, going from 3 to 5, with a solitary red 4 (indicating that there might be some flat tires). Roll the dice and see how many spaces it moves, adding any bonus based on whether or not all the racers are out of the peleton and whether or not the peleton master decided to push. Any racers that are “absorbed” back by the peleton, with no further penalty apart from the fact that since a racer must move at least 4 spaces when breaking out of the peleton, it might be difficult if the racer doesn’t have enough energy. If the peleton moved 5 or 6 spaces, each racer in the peleton must expend 1 or 2 energy. Note that you can also be left behind the peleton should you not have enough energy to pay for the movement of the peleton.

A neat little idea, which I’ve seen in Formule De, is the concept of slipstreaming. Simply put, if you manage to finish behind another racer, you’ll gain an additional free space next turn, as long as the other racer didn’t move more than 6 spaces on his turn. Simple, but makes for interesting positional strategy.

And then there is the little extras, like Energy stations that allows you to grab a water bottle that can give you back a small amount of energy; rules for getting a cramp (moving too many spaces in a steep hil), a flat tire or worse, falling down (either trying to go through a group of racers who are blocking your way or slipping on a patch of oil) and of course some rules for doing a full Tour, since a race is simply one leg of the Tour. While we didn’t play a full Tour, Steph took the time to explain the rules to us and they sounded quite simple, but seem to have more of what we saw, namely strategy.

The game then centers around managing your energy but also choosing your moment carefully for breaking out of the peleton. You might not want to break out too early, since you have very little energy at the end of the day, but you do want to have all your racers out towards the end of the race in order to set up blocks or at very least some slipstreaming options to gain to few, precious extra movement spaces. A little mathematical, but the chaos of other players make up for this. You might be able to plan things to a point, that is until the peleton leader decides to push things or a batch of racers block your path.

We played on a fairly simple racing track, with a slowly raising hill at the start, followed by a steep hill with a long downhill section, which ended in a flat terrain end of race. The rules were fairly simple to grasp and, after having named our racers and selected their special ability, we were off! Steph was the first one to break out, trying to see if it would give him an advantage. Benjamin then followed with his climber and I followed suit. I release my second racer just when we got to the downhill part, with my third not far behind. A good downhill section was enough to drain my climber, but placing him in a good position to allow my rouleur to slipstream past him and the rest of the pack. I managed to finish the race with 9 energy point, but both my leader and my climber were almost dead. Steph came in second, with Benjamin not far behind. All in all, not a bad game.

On Saturday night, we played a game of Skyline (Tasty Minstrel Games) by David Short. My wife Tanya and my mother-in-law Marlene (who was visiting us) joined me, even though they are not really gamers. I had never played the game before, but it seemed simple enough and it had a nice dose of “push your luck”, which is always fun. 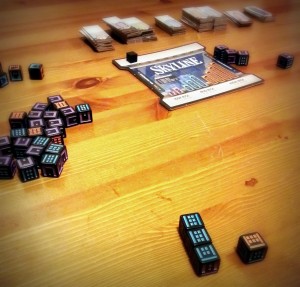 The game centers around 60 special dice, which will be used to create skyscrapers, and thus earn the players points. As such, the dice are broken down into three types: ground floors, upper floors and penthouse dice. On each of these dice, 3 of the faces will be purple (except for the penthouse dice, where they will be blank), 2 will be blue and 1 will be orange.

On his turn, a player will go through 4 distinct steps: first, decide if he wants to grab 3 dice from the construction yard (where all the dice are), deciding exactly what the dice are or take all the dice in the abandoned pool (which can be anywhere from 1 die to 4 or 5 dice, but the player is stuck with the type of dice that are present in that pool). He then rolls the dice and attempts to use at least one face, keeping a few simple rules in mind: you can’t mix colors in a skyscraper; you need to start with a base; you need to end with a penthouse or a cap; and you must respect the maximum and minimum height for each building color. If you used at least one die (you can use more if you can), you pick up the remaining dice and roll them again, seeing if you can use some of the newly rolled dice. If you can’t use any die, you have two choices: put all the dice in the abandoned pool or scrap one building (it can be a finished building or one that isn’t done) and thrown out one dice by placing it back in the construction yard.

The game ends when everyone has had 9 go or if someone builds a 6 dice building. The game is playable in roughly 15 minutes and flows very well once everyone grasps the rules.

This game falls squarely in the category of filler or light gaming fare. It is very simple to explain and easy to grasp, the decisions are not too hard but nonetheless interesting to take and flows easily. Fun game for the end of an evening or when you’re playing with non-gamers.

We played two games back to back, with the first game ending in a tight race between Tanya and me and the second game ending with Marlene building a 6 dice building only to come in second with 81 points to my 82.