It was kind of a slow week for me gaming wise, with three very different games and three different groups. Only three games played, but all with some interesting aspects to them: one is a multiplayer wargame, the second is a bike racing game and the last one is a simple, push-your-luck dice game. Since this will be a long report, mostly because of the first game, I’ll break it up in two section, with the second section being posted tomorrow. Without further ado… 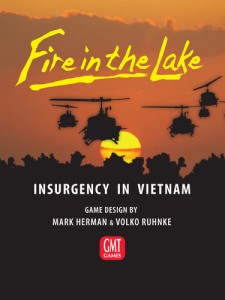 Fire in the Lake (from BGG page)

First up was Tuesday Night game of Fire in the Lake (GMT Games), by the great tag team of Volko Ruhnke and Mark Herman. This is the fourth game in the COIN series from GMT, after the already published Andean Abyss and the coming-real-soon-I-can-taste-it A Distant Plain and Cuba Libre (both co-designed by Mr Ruhnke, with Brian Train for A Distant Plain and Jeff Grossman on Cuba Libre). All games in the series share a few traits beyond being treatises of COunter-INtelligence conflicts. They all play 1 to 4 players (but imho, they are better with 4) and they all feature the same core mechanics. Although this is a card-driven game, the players do not have a hand of cards but rather the game is driven by the currently face-up card. This card has two different pieces of information that are important: on top of the card, the order players will (possibly) take an action this turn and at the bottom, what event can happen. 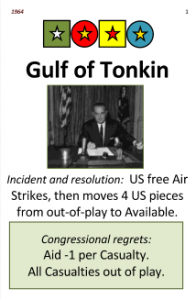 In the above example, the player order would be USA, North Vietnam (NVA), Republic of Vietnam (ARVN) and finally Viet Congs (VC). However, only the eligible players can elect to play on a given card since the system does not allow a player to take an action on two consecutive card. Only two players can act on any given card, with the first player’s choice influencing what the second player can do. A player is not forced to take a turn, since if he pass, not only is he still available to play on the card next turn, but he will be rewarded with extra resources. The first eligible player can either do an Op (from 4 different actions, which differ depending on what faction is played, with the US and ARVN having the same actions, while the VC and the NVA share their actions), do an Op and a special Activities (powerful actions that are specific to a given player AND that are free) or act on the Event part of the card. Depending on what the player did, the second player’s choice is limited: if the first player opted for a simple Op, the second player can only do a limited Op (in only one territory); full Op and Special Activity, then the second player can act on the Event; first player chose the Event? then the second player can do an Op and a Special Activity. The result of this simple system is one of choices, especially when you’re the first player. Even though you do not have cards in your hands, you can nonetheless affect strongly what actions the second player can do and since some of the players are allies of convenience, it might not always pay off in the end to be too nice to your ally. Great, simple system. You’ll notice that the Event section is broken down into two parts: a shaded part and an unshaded part. A player who wishes to use the event on his turn can chose either of these sections, whichever is more to his advantage. Ops can be done in as many territories as the player wish, as long as he can pay for it with resources (except the US, which uses the ARVN resources. How’s that for a fun little symbiotic relationship?) Ops will let you do the standard range of: place a unit, move a unit attack a unit, but also discover a unit and cause terror. Again, all actions are not available to everyone, but rather broken down by US/ARVN and VC/NVA axis. There are three types of units on the maps: troops, irregular troops which are either underground/active and bases. Irregular troops that are underground cannot be attacked as a general rule and only become active if they are used for an Op or if they have been discovered. Bases add to recruiting drives and have a hard limit of 2 per territory. The US has the added advantage of being able to create ARVN troops, which of course spends ARVN resources. 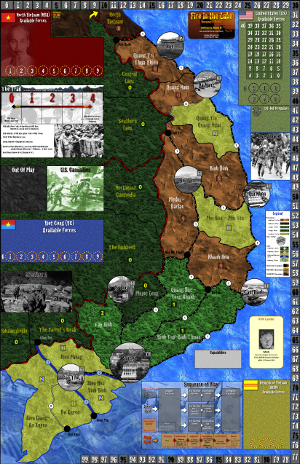 The core of the interaction is pretty standard area majority (which determine whether COIN (US + ARVN) or the NVA is controlling a region) and where the sympathy of the region lies (5 levels, from Strongly Support to Strongly Oppose).

All of these very simple mechanics combine to give each faction very different objectives that can sometimes go in the same direction, sometimes diverge, but make simple alliance difficult. For example, the US victory condition is the Total support they have (Strongly Support doubles the population level) plus the amount of US Troops and Bases that are available (this reflects the fact that the US was trying to pull out of Vietnam, but you need boots on the ground to gain the support needed to win) which must be at least 50 or more, while their “friends” the ARVN need to have a total of 50, but this time adding COIN controlled population plus Patronage (which is different from AID). This is also true of the VC and NVA, which use Total Opposition plus VC Bases for the VC and NVA controlled population plus NVA bases. Of course this would be a simple objective to get if a victory was granted the moment you passed your objective, but this isn’t so. You need to maintain/attain this objective when a Coup card comes up, which are mixed sub-decks, which are then stacked together to make a main deck.

Some of the added twists to this version of the COIN series include a political landscape which is more centered on the Coup cards, with each card modifying the game as well as putting (or not) a new leader for the RVN. There are also pivotal moment cards which the players can use to “trump” the current event/player order. Another wrinkle is that Op that are movement-based are modified if the next card showing is a Coup card, a simple rule which simulates well the Monsoon season without adding too many rules.

One of the hallmarks of the COIN series so far is that it while the system is simple and since players do not have a hand of cards, you’d think the choices would be simple to make, but it is not the case. The chaos brought about from playing against 3 other players who have very different victory conditions and options than you make for a very dynamic series of game, but unfortunately one which is sometimes hard to grasp fully the first few games. You find yourself staring at the board too often, with no clear strategy or idea of what you should do. Couple this with the distinct feeling that any progress you might have made on your turn is usually destroyed in a few cards make this feels futile by time and that is, at least to me, the greatness of the game. You cannot simply plow forward and hope for a victory. You need to be creative and accept that you will lose some of the progress you’ve made. You need to attack on multiple front, leaving your opponents no choice but to attack you at A, while not being able to stop you at B. You come to very much understand the frustrations that must be felt on a daily basis by the commanders and thinkers of the different factions as they try and advance their cause. As I said, lots of fun. Frustrating fun, but fun nonetheless and this game, at least so far, is no different.

Fire in the Lake is no different. Enough little differences to make it a (future) welcome addition to the growing series and one that I can see myself playing many times in the future, but enough in common that it can be explained quickly to veterans of the system. The four scenarios include a short one that can, once you’ve got the rules down pat, be played in an evening, and three long ones, each with a lot of replayability.  I really think that, apart from some minor adjustments, Mr Ruhnke has hit it out of the park once more. Recommended, as soon as GMT puts it out.

Our playtesting session on Tuesday was marred by technical difficulties and the usual learning curve of playing any of the COIN series, with lots of “OK, I *think* I know what I’ll do, let me check again…” and “Hm. Ok, so… do I? no, wait. I should… I think I go it.” but was fun and showed us what could be done with the system. I do believe that Matt(AVRN) and John(US) have a slight edge on me(VC) and Mike(NVA) since they’ve been playing PBEM games on the side, but I’m confident that we can make their life hard. We stopped right before the first Coup card, with John mopping up a lot of my units, but not having made any real inroads towards victory. Since it is quite easy for me to bring back units, especially in areas with bases, it’s just a matter of time before I regroup and start to turn the local population against the imperialistic aims of the US and their lackeys, the AVRN. We played for maybe 1h30 and managed to get further than a 1/3 into the game. Not bad for a first game, but all players were familiar with the system. A good playtest session so far.

Looking forward to continue this game and I can’t wait to play face-to-face. It should be a winner.