Got two new RPGs from Pelgrane Press in the mail today, namely Skulduggery and The Esoterrorists 2nd Ed, both from Robin D Law. 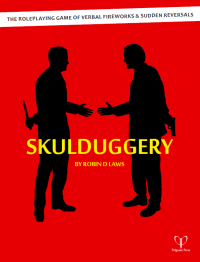 Skulduggery, a game of verbal fireworks

Some interesting, different games there, with Skulduggery being about arguing, debating, backstabbing and generally having verbal fun at the expense of your opponent. I had never heard of it until I saw Black Smoke, from Gareth Hanrahan. Why did this pique my interest? Well, what’s not to love about a game module centered around the death of a pope in 16th century Italy? Yeah, how about the fact that the players don’t care who killed the pope but are rather 6 cardinals trying to become the new pope? How’s that for a fun time around the diner table! Very excited about this, even though I haven’t roleplayed in ages. Will let you know how it went as soon as it hits the table, which should hopefully be soon. The core rulebook comes with 4 settings and there is an additional 2 that are also available, at a very reasonable price. 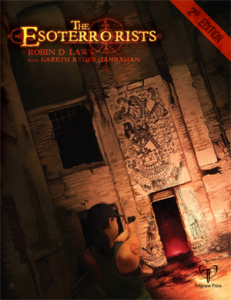 The Esoterrorists, or occult terrorism in modern times

The second book is The Esoterrorists 2nd Ed, which is based on the Gumshoes system, which I believe is also the basis for most of the games from Pelgrane. In this game, we see the players being elite investigators trying to stop global occult terrorists, which sounds a little like Call of Cthulhu (or Trail of Cthulhu, depending on what system you prefer), but in a modern setting and with a wider occult bend. I’ve heard a lot of good about the Gumshoes system and I am very intrigued. Again, I’ll let you know more about this game once I’ve played/read the rulebook.

Between these two games and Fiasco and Carolina Death Crawl (both from the excellent folks at Bully Pulpit games), looks like I’ll be doing some roleplaying in the near future.