A good game day again at Concordia, with about 10 people showing up to the weekly meetup. Although I hadn’t quite planned it that way, I ended up playing *only* card games today, not that I’m complaining. I love me a good card game and I’m always fascinated with the different mechanics that can be packed in.

My session started a little earlier than most others since Mike and I got together at 11h00 to have some pre-session fun. I had picked up a print-and-play version of Yomi (Sirlin Games) the day before and put together 4 of the 10 character decks that come with the game. The game is (yet another) simulation of a fighting game. I say yet here since it fits neatly in Sirlin Games‘ catalog of fighting games (the other two being the excellent Puzzle Strike and Flash Duel, which I haven’t tried yet). The basis of this game however center more on being able to read your opponent and trying to play the perfect move than coming up with the best combination of cards/chips, which is Puzzle Strike‘s dominion. At it’s core, Yomi is a simple game of rock-paper-scissors (RPS), with the cards having two “ends” showing two of the following three actions: attack; throw; dodge or block. Just like RPS. Attack will beat Throw, which beats Dodge/Block, which in turns beats Attack. Attacks do different levels of damage as do throws and have different speeds, in case of ties. Since this is based on a regular deck of cards, the face cards and aces are special, more powerful attacks or throws. So, you play a card, with the action you wish to do facing your opponent and both reveal at the same time, look at the cards and see what happens. Very simple. If you land an attack, you can “chain” another attack by simply playing a card that is one rank higher, an “ender” or “link” (special keywords that are on face cards). What makes the game really interesting is the additional powers some cards have as well as some of the face cards, especially the ace. Of course, each character deck is slightly different, with different special powers, different health, etc. Fun and fast, but… the rule sheet is actually pretty horrible, making it hard to follow just by reading them and the text on the cards is tiny. Once you start playing however, everything becomes clear, mostly because all of the rules are actually on the cards themselves, such as what to do when you successfully block an attack (you take the block back in your hand and drawn another card), how to chain, etc. Once you become familiar with the game and your deck, it’s great fun with trying to bluff/out-think your opponent. Look for a much more in depth review later on. 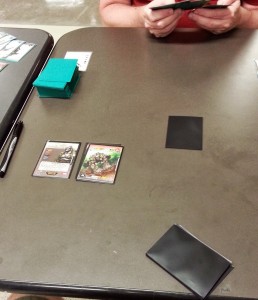 Both games took about 90 minutes to play, with the first game being somewhat longer as we were getting used to the rules. Mike won both games, as I seem to be struggling with not being predictable, a skill I need to further develop.

Hughes showed up just as we were finishing the second game and we decided to play a quick game of Suspense (Daniel Solis). I’ve talked about this in my last session report and I have to admit it’s growing on me. Really good game, but I would make a small change, mostly because I think the games are way too short with needing only 10 points to win. Next time I’ll try with 15 points and see how it goes. And yes, the in-depth review is coming… 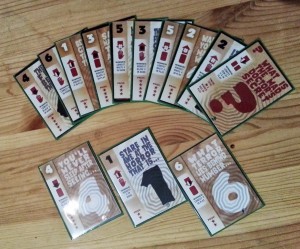 Yup, that’s all the cards in the game.

Hughes won the game, with a final score of 13, 7 and 2, with me being completely out of the running, and the game lasting about 20 minutes, including rules explanations.

It was almost one and people started showing up, first Nic and then Valdir. We started playing a game of Such a thing? , which I don’t really care for (even though I was winning).

More people started showing up so it was time to break up into more group. By that time Joe, Mac and Ethan had arrived, with Lucam and Seb showing up a few minutes later.

Ethan had brought a test version of Pandemic  (ZMan) on iOS and I got to try the tutorial. I’ve never played Pandemic and that made me the perfect candidate to go through the tutorial. Looks like a fun game and I’m looking forward to pick it up for my iPad.

We broke up into two groups of 5, with one group playing Colosseum (Days of Wonder) and Ethan, Seb, Lucam, Mike and me going off to play Parade (Zman). It is a fairly simple card game where the aim is to take as little points as possible. Instead of being a classic trick-taking game however, it uses a clever mechanic: the conga line, or the parade. The deck is made up of 66 cards, broken down into 6 suits/colors of 11 cards, going from 0 to 11. The look and feel of the cards is simply gorgeous, with lovely Alice in Wonderland illustrations and a nice card stock. To start the game the dealer shuffles all the cards and deals out 5 to each player, and then creates the parade by laying down face up 6 cards in a line. On his turn, the player will lay down one card at the end of the parade, see if he needs to pick up any card(s) and then draw one more card. The game ends when the last card is drawn, then everyone gets one more go or if one player has taken cards in every suit. You then score your cards, with the lowest total winning. The player will pick up cards from the parade in the following way: first thing, using the rank of the card, the player will determine how many cards are safe, for example, if the parade is 7 cards long and you play a 5, then the last 5 cards would be “safe” and you wouldn’t pick them up. Should the number be even higher (7 or more), then you wouldn’t pick up any cards at all. Looking at the rest of the cards, the player would pick up any cards that are of the same color/suit and any cards that are of the same or lower rank. Fairly simple. At the end of the game, all the players dump two cards from their hand, add the remaining cards to those they picked up. You then determine who has the majority in each colors. These cards will be turned face down, with each of these cards counting for 1 point. All the other cards count for their rank value. Add up all the numbers and that’s your final score. 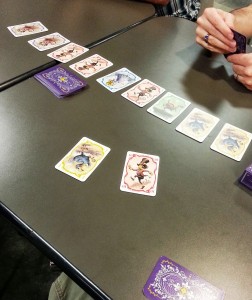 Fun little game with nice decision making and some (slight) brain burning moments. Plays fairly fast, even with people with analysis paralysis. Will play again, especially since it plays well with larger groups. I have the feeling that the game is more chaotic with 5 players and probably more tactical with 2 or 3. Blanking out on who won this one…

Up next was a game of Race for the Galaxy (Rio Grande Games), with the first two expansions and with the same group as the previous game. Race for the Galaxy (RftG) is clearly a descendant of the venerable Puerto Rico, but in card game form, with the role selection mechanism (complete with bonus for the people who selected it). It is a game of building up your “plateau” or in this game, your galactic civilization. Each turn all the players select simultaneously what action they would like to take and then reveal their choices. Each phase of play (Explore, Develop, Settle, Trade, Produce) only take place if one of the players has selected that action for the turn, which leads to some interesting strategies: keep an eye on what your enemies are doing, even though there is no real direct interaction. If you’re sure that someone else will choose the action you need, then you can select something else. Everything is centered on the cards: they are the tech and worlds you settle, they are also the resources you produce and they are the way you pay for developments or worlds you settle. Setting up an economic engine that will keep your hand at 10 cards is essential since it is the way you’ll be able to get the big points cards that will net you a victory at the end of the game. The game ends when one player has put his 12th card in his tableau, at which point you finish all the phases and you tally up the points on the cards in your tableau, the victory points token you’ve acquired. The player with the most VPs wins. 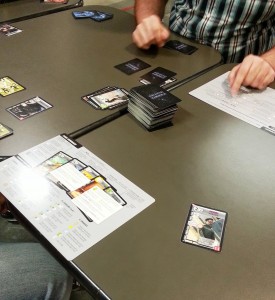 Race for the Galaxy, from Rio Grande Games

The game was quite spirited, with everyone but Ethan having played before. We went through the draw deck 3 times, which is way more than I am used to. In the end, I thought I did quite well with 39 points, but Lucam got an incredible 52 points to take the win. Great fun.

In the meantime, the other table (minus Valdir) started a game of Small World (Days of Wonder). Brand new copy too, with the game starting by punching out the counters…

The last game of the day for me was Black Spy (Zman), the old Alan Moon trick taking game. The aim of the game is to score the least points possible, by either taking no black cards or all the black cards, in a way similar to Hearts, with the following exceptions: the worst card as far as points is the Black 7, of which there are 6. There is also 11 cards of each suit (barring black, which there are 16). All the black cards are worth points as well, going from 1 to 5, with the 7s being worth 10. All the other cards are worth 0 points, except for the other 3 7s which are worth -10 points. So, don’t take those black 7s. Also, there is no trump suit and you can either follow the suit of the card that was lead or follow the rank of the card, which makes for some confusions sometimes. It also makes it much harder to track who’s got what suit. The game is over as soon as one player’s score is over the pre-established limit, which varies with the amount of players.  Oh, and don’t forget to pass three cards either left or right, depending on the round. We did and it certainly would have made a difference.

Not sure how I feel about Black Spy. It is a fun trick taking game, but you seem to have little control over how a hand will go. It is very easy to be unable to lose control of the game (let someone else take the lead) since there are so many ways to not play in the asked for suit. Would play if someone asked to, but wouldn’t be the one proposing it. Lucam won again, I think…

And that was it for me. Some of the others stuck around to play some more games. Can’t wait to do it again.